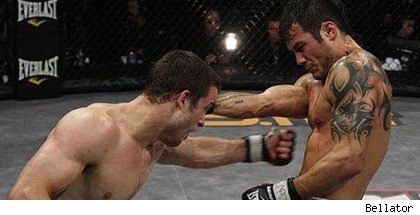 If Pat Curran keeps this winning thing up, he better start getting used to the attention.

"I'm getting a lot of interviews now – people wanting to do stories on me," Curran told MMA Fighting on Monday. "This is just the beginning. It's definitely starting to pick up now. The other day, I saw pictures of the Roger Huerta fight in Fight! magazine, and I thought that was pretty cool."

The calls started coming a little more steadily after Curran beat Mike Ricci in the quarterfinals of Bellator's Season 2 lightweight tournament in Chicago in April. And "beat" might be an understatement. He put Georges St-Pierre's training partner's lights out with one cracking right hand.

All the highlight-reel knockout earned him was a chance to get picked apart by Huerta – or so just about everyone thought. A sizable underdog, Curran, just 22, used an effective standup game to outpoint Huerta, Bellator's heralded free-agent signee, en route to a unanimous decision win.

On Thursday, Curran goes after a third consecutive high-profile upset win when he meets Toby Imada at Bellator 21 for the Season 2 lightweight title and a date with Season 1 champ Eddie Alvarez. Imada is a grappling machine with eight of his last 10 wins by submission – including the now world-famous inverted triangle tapout of Jorge Masvidal last year that won fairly universal acclaim as the year's best submission. One would think Curran might have tired of hearing about his opponent's all-timer by now, but even he seems to be a fan of it.

"It's a sick move – I like seeing it because that's a really hard move to pull off," Curran said. "But I'm not worried about it. I don't see myself getting caught in that position."

Though Curran is no stranger to the ground game, he acknowledges that to find success against Imada, he might not want to stray far from the standup formula that beat Ricci and Huerta.

"The gameplan is keep it standing," Curran said. "My standup game is really starting to develop and get better, and I have really good takedown defense. So I should be able to choose where I want to take the fight. You would think that I wouldn't want to go to the ground because that's where Imada is starting to finish guys and catch guys in submissions. So we want to play it safe and keep it to our advantage."

Helping that cause his his cousin, former WEC fighter Jeff Curran, who has also fought for the UFC, Strikeforce, Pride and Bellator. Jeff owns an MMA school north of Chicago and also runs his own promotion. Keeping it in the family is important to Pat.

"He's always been there, so he knows my strengths, my weaknesses, what I need to improve on in a fight," Pat Curran said. "He just has a different perspective and a different view than I do. He's cornered every one of my fights, so he knows what I need to do. Experience-wise, he's been doing this for more than 13 years. It's definitely good to know that he's in my corner, and I try to listen to him as much as possible."

Curran first tasted the spotlight when he was featured on an episode of the TapouT reality show's second season – but nothing quite like what a win over Imada would likely bring him.

"I'm still new to the sport – I've only been doing this a few years," Curran said. "But overall, I think I'm well-rounded. Standup wise, I feel like I'm going to have the advantage on him.

"People are starting to notice that I have potential in the sport and they kind of have to keep an eye out for me, and I'm an up-and-comer. Hopefully I can just keep the ball rolling and continue to prove myself and prove to everybody that I belong here and I'm a force to be reckoned with in the future."