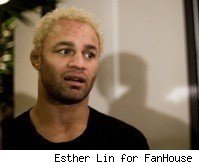 It didn't take long for the Josh Koscheck-Georges St-Pierre rematch to get personal all over again.

At Monday's The Ultimate Fighter 12 media day in Las Vegas, Koscheck discussed accusations within the MMA community that the UFC welterweight champion had experimented with steroids. The American Kickboxing Academy fighter also said that he would be in favor of submitting random blood tests to make sure both fighters are clean heading into their fight following the taping of TUF 12.

But 48 hours later, Koscheck apologized for his remarks.

"Media stories on comments I made about rumors of GSP are in no way factual," Koscheck said. "I'm known for polarizing comments, and I got caught up in hyping TUF and our fight. I was wrong, and apologize to GSP for trying to invalidate his hard work and talent."

Share MMA Fighting was not present at TUF 12 media day, but according to a report on MMA Junkie, "Koscheck made it clear that he was not making a direct accusation of impropriety from the UFC's welterweight champ but rather just passing on what he had heard from other sources."

Both Koscheck and GSP said they would be in favor of Olympic-style drug testing, which is considered more thorough than the typical urine-based drug tests administered by the athletic commissions across the country because blood tests are able to identify a wider range of performance-enhancing drugs, including Human Growth Hormone (HGH).

St-Pierre has never tested positive for any kind of performance-enhancing drug.

GSP vs. Koscheck is expected to take place in December. No location or specific date has been announced. Ultimately, the governing athletic commission would be the one who decides whether a more strict drug testing procedure would be implemented for this, or any, fight on the card.