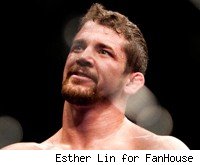 WEC lightweight contender Shane Roller is being eyed for a return at WEC 50 on Aug. 18 in Las Vegas, MMAFighting.com has learned.

Roller is coming off a first-round rear-naked choke victory over Anthony Njokuani at WEC 48 in April, and just over a week ago at the UFC Fan Expo, registered another rear-naked choke by tapping out Takanori Gomi in a grappling super fight.

With a record of 8-2 in MMA and 5-1 in the WEC, Roller is close to a title shot. The former three-time All-American has won his last three fights and his sole WEC loss was against current WEC lightweight champion Ben Henderson.

No opponent has been signed yet for Henderson, but another fight with title implications happens in two weeks when former champion Jamie Varner faces off against undefeated Kamal Shalorus in the main event of WEC 49 in Edmonton, Alberta, Canada.