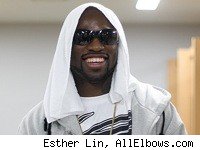 Though he's got a collection of Toney's old fights on tape, the Strikeforce light heavyweight champ had never had any contact with the boxing great until he got a call from Toney's management out of the blue one day recently.

"I guess [my phone number] is just out there for anyone to get, I don't know," Lawal told MMA Fighting. "But I got a call from a guy named Dave Henderson and he was like, 'How about coming out and training with Lights Out.' I was like, 'You mean James Toney?' So I came out last week and worked out with him. I was pretty surprised."

But if you're hoping that Lawal will reveal exactly what's going on in Toney's camp as the boxer prepares for his planned MMA debut against Randy Couture, get ready to be disappointed. The whole thing is a very secretive affair, as Lawal found out once news leaked that he'd been working out with Toney.

Share "I didn't know it was a secret," Lawal said. "That's kind of my fault because I didn't think it was a big deal. But they were like, you know, as far as training goes, keep it under wraps. He said that's how they do it in boxing so that's how they're doing it with this."

All Lawal could say was that he was brought in not so much as a wrestling coach for Toney, but more as "a measuring stick to see where he's at."

Lawal also said Toney is working jiu-jitsu with "a Brazilian cat who competed at Mundials and Abu Dhabi, but I can't say his name because they want to keep it a secret."

At the moment it seems as though Lawal won't be a full-time sparring partner of Toney's, though he did say that he hopes to train with the former champ again in the future and hopefully learn some striking techniques, which they didn't do much of in their initial training sessions together.

As far as putting on the gloves and sparring, however, Lawal isn't in any hurry to step into Toney's realm.

"Thank goodness we didn't do any stand-up. I've seen some of his sparring footage from when he sparred with Danny Green, and I'm not trying to be like Danny Green and get busted up like that. Hell to the no. I pass on that stuff right now."

If nothing else, the fact that Toney is bringing in fighters like Lawal to work with should serve as an indicator that he's taking his UFC fight seriously. And for Lawal, it didn't hurt that he got a chance to train with a fighter he's revered for years.