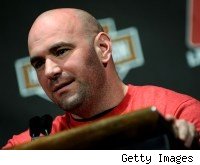 Spend any significant time around UFC President Dana White and you'll quickly realize that the most-asked question he faces is not about a specific fighter or a dream fight, but about when he is bringing his traveling action spectacular to a city near you. It is both the blessing and the bane of White's existence, because while demand is high, he can never truly live in the moment; it's always about building to what's next. And there's always something next.

The central hub of that "next" mentality is in the UFC offices, in the form of a large board that partially covers one wall and is filled with possible dates, venues and cities for the future. Some are domestic, some international. Some have been visited before, others are hot targets, and a few are intriguing longshots. But no matter what, whether the UFC is selling a grudge match, a technical classic or prospects rising up the ranks, it all comes down to a place on the board.

"We'll fill in a city, we'll scratch it out, put in another city. We're always looking," UFC President Dana White said. "We put a lot into deciding where we're going to go. We don't just throw a dart at the wall."

Yet seemingly, the UFC wants to go wherever a dart could possibly hit. Ask about possible locations for events and you almost never get a "no" for an answer. China, South Korea and India are hot targets. After Brazil won their 2016 Olympic bid, the South American country is on the radar. Mexico is also on the short list. But it doesn't stop at simple targets; an Afghanistan show is likely around the New Year.

The worldwide expansion was always part of the master plan, but progress has ramped up in recent months. In January, Zuffa sold a 10 percent stake to Flash Entertainment, an Abu Dhabi-based entertainment powerhouse that gives the UFC a major presence in the Middle East. Less than a month ago, the UFC opened an office in Toronto that raises its profile in Canada, and due to its proximity to major U.S. cities like New York, Philadelphia and Boston, will serve as the company's east coast office.

White is fond of saying that the first event in a new region "spreads the virus," beginning an outbreak of fanatics, but the original "virus" was spread by The Ultimate Fighter reality show, and the company plans to follow the same blueprint in some new markets.

"We're going to start doing Ultimate Fighter China, and Ultimate Fighter Middle East, and all these different areas, and creating talent the way we've done here in these other markets, and then we're going to bring the UFC together," White said. "The guys who win end up coming in the UFC and becoming big stars here, there and everywhere else."

Perhaps because of the Flash Entertainment/Abu Dhabi partnership, the UFC expects the first international edition of TUF to take place in the Middle East, while a Canadian version would soon follow. No timetable is yet set as logistics continue to be worked out.

"We're trying to figure out how to plug the whole world in so everybody can watch and keep up with what's going on," he said.

While those countries seem like logical choices for various reasons, other more challenging but potentially more lucrative markets are luring more of the company's attention.

Chief among the UFC's dream markets is Asia. China and India, with 2.5 billion citizens between them and hundreds of millions of potential fans in the UFC's target demographic, are high on the company's priority list. White has reverentially referred to China as "the cradle of martial arts." UFC Chairman and CEO Lorenzo Fertitta recently spent more than a week in the country with plans of opening an office, and recently promised the UFC would hold an event there before the close of 2011. Earlier this year, the organization also inked a deal to make its events available on Sohu.com, a major Chinese web portal (China is the world's largest internet market, with over 400 million users).

While progress is being made on several fronts, the one nation that has continually flummoxed the UFC is Japan. In March 2007, the UFC announced its acquisition of PRIDE, seemingly opening the former MMA hotbed to the U.S. promotion. But the deal never panned out as the company expected. UFC never ran a PRIDE show, a lawsuit ensued, and Japan continues to remains an elusive market.

"It's one of those markets we have to take our time and keep working on," White said.

Asked if Japanese organized crime was a problem – a Yakuza scandal reportedly played a major role in the downfall of PRIDE – White was blunt.

"They're part of it. They don't help," he said. "We're working on it. We're not going to give up. We're going to keep hammering at Japan until we figure it out."

Domestically, the waters aren't quite so treacherous to navigate. A debut date in Indianapolis is nearly finalized for September, while the Austin/San Antonio region is a likely destination for a Sept. event. Other first-time locations like Pittsburgh and Albuquerque, N.M., are also somewhere on the big board.

"We pull numbers of how we do on TV, how many pay-per-views we sell, what their economy looks like," White explained. "We look at a lot of things before we go into a market."

If it came from anyone else, you might doubt his sincerity, but when White tells you he wants to go everywhere, it comes from a man who sometimes jets to three different places in one day. The world is not getting any smaller, and neither is the ambition of a company intent on spreading their virus.