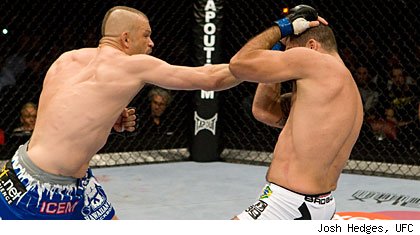 Chuck Liddell vs. Rich Franklin is the UFC 115 main event. Get UFC 115 results, play by play, videos and UFC 115 photos and more on Liddell vs. Franklin - a battle between former UFC champions.

UFC 115 Results, Play by Play
Pay-Per-View Bouts
Rich Franklin def. Chuck Liddell via first-round TKO
Play by Play: UFC 115 Live Blog: Chuck Liddell vs. Rich Franklin
Decisive Round: Round 1: Franklin with an inside leg kick early. Liddell follows up with one of his own, which is rare. Franklin clinches, but Liddell shrugs free. Liddell lands a hard body kick out of the clinch. Liddell takes Franklin down two minutes in. Franklin works free quickly. Liddell is bleeding over his left eye. Not sure where it came from, possibly an accidental headbutt. Franklin lands a left as Liddell wades in. Liddell knocked Franklin backwards with a right. Franklin answers back with a left. Less than a minute remaining. Liddell was on the way to winning the round when Franklin lands a straight right. Liddell goes down unconscious and it's over, just like that.

Mirko Cro Cop def. Pat Barry via submission (rear-naked choke)
Play by Play: UFC 115 Live Blog: Mirko Cro Cop vs. Pat Barry
Decisive Round: Round 3: Cro Cop goes for the high kick again early. Barry ducks under it. Cro Cop gets a body lock looking for the takedown. Barry fights it off and breaks free. Barry keeps switching stance, landing kicks and showing different looks. His punches have lost some steam though. Cro Cop with a right hook and straight left combo and puts Barry against the fence. Cro Cop throws a few strikes against the fence as Barry fades. The ref breaks them with 80 seconds left. Cro Cop lands a hard left. Cro Cop floors Barry with a hard left. Cro Cop throws a series of lefts. He sinks in a rear naked choke. Barry looks in big trouble and he taps. Barry will look back and regret not trying to finish when he dropped Cro Cop twice in the first round.

Martin Kampmann def. Paulo Thiago via unanimous decision
Play by Play: UFC 115 Live Blog: Paulo Thiago vs. Martin Kampmann
Decisive Round: Round 1: Kampmann's quickness advantage is playing well early, as he's touching Thiago with crisp combos. Thiago still measuring him even though he's shown to have the reach advantage. Kampmann with a couple of jabs. Thiago tries to take a leg for a takedown, Kampmann pulls free and fires off a jab. Kampmann knocked Thiago backwards with a right. Thiago went for a leg and got a takedown with 1:15 left. Kampmann used a guillotine to work free. Thiago used a judo throw to put Kampmann down. Kampmann tried a power guillotine from the top. Thiago was in a bit of trouble but worked free as the round ran out. Strong round for Kampmann, 10-9.

Ben Rothwell def. Gilbert Yvel via unanimous decision
Play by Play: UFC 115 Live Blog: Ben Rothwell vs. Gilbert Yvel
Decisive Round: Round 3: Yvel tried a takedown but it didn't work. Rothwell ended up on top and moved to side control. Yvel's defensive guard is still bad after all these years. Rothwell moved to the Americana but didn't really commit to it. Both men are fading as the round goes under two minutes left. Rothwell moves into the crucifix. Rothwell's just smothering him from the top. Short elbows are most of his offense. Yvel can't escape. Every other time he's been near the fence and used it to break free. This time he's in the center of the cage and he has no answer. Rothwell isn't doing a ton, but enough to win. MMA Fighting scores it for Rothwell, 10-9.

Carlos Condit def. Rory MacDonald via third-round TKO
Play by Play: UFC 115 Live Blog: Carlos Condit vs. Rory MacDonald
Decisive Round: Round 3: MacDonald with a headkick early. He swarms with strikes. Condit answers with a power right hand. MacDonald goes for the takedown but Condit ends up on top. Condit lands a left elbow from the top. Condit is fighting like a man who is behind on the scorecards and needs a finish. He mounts briefly, but MacDonald gets it back to half-guard. Condit with another power right from the top. MacDonald gets back to his feet with 2:40 left. MacDonald tries a takedown and Condit ends up on top again. Condit starts hammering with elbows from the top. MacDonald's eye is swelling quickly. Condit keeps his position and lands more elbows. What a frantic finish for Condit. This is how you fight from behind. MacDonald is trying to survive as there are 45 seconds left. Condit keeps up the flurry and with less than 10 seconds left the ref steps in and calls a halt to the action.

Spike TV Bouts
Evan Dunham def. Tyson Griffin via split decision
Play by Play: UFC 115 Live Blog: Tyson Griffin vs. Evan Dunham
Decisive Round: Round 3: Griffin's finding the mark early with his striking, a couple right hands find their home. Dunham counters with a combo. Griffin ducks under and goes for a takedown, but Dunham fights it off and breaks free. Dunham knocked Griffin down with a kick to the body, then changed levels for the takedown. Quickly, he took Griffin's back again. Griffin tried desperately to turn into him and end on top, but Dunham showed tremendous positional control. Instead, Griffin got up again with Dunham on his back. Forty-five seconds left. Griffin slammed him down but Dunham stayed on his back as the round ran out. MMA Fighting scores the round for Dunham, 10-9.

Matt Wiman def. Mac Danzig via first-round submission
Play by Play: UFC 115 Live Blog: Mac Danzig vs. Matt Wiman
Decisive Round: Round 1: Wiman slipped and ended up on his back. Danzig landed some strikes from the top. Wiman got a guillotine from the bottom and turned Danzig over. Danzig tried to fight through it as Wiman squeezed from the top. Ref Yves Lavigne picked up Danzig's arm to see if it was limp and see if he was still conscious. He didn't like what he felt and quickly called the fight. Danzig, though, immediately protested. It appeared he never appeared to lose consciousness. Wiman agreed and offered to restart, but Lavigne informed the fighters the bout was over. Controversial ending.


Preliminary Bouts
Mario Miranda def. David Loiseau via TKO (strikes)
Play by Play: UFC 115 Undercard Live Blog
Decisive Round: Round 2: Loiseau lands two left head kicks in a row. The crowd is excited. Loiseau then connects on an overhand right. Miranda has enough of this striking business, so he takes Loiseau down again. Miranda lands shots to Loiseau's head. Big cut has opened on Loiseau's head. Miranda has side control. Loiseau gives up his back. He's turtled up. This feels like the Ed Herman fight all over again for Loiseau. Miranda flattens Loiseau out. Loiseau is trying to defend the rear-naked choke. Miranda is landing repeated elbows and strikes to the side of Loiseau's head before the ref stops the fight.

James WIlks def. Peter Sobotta via unanimous decision
Play by Play: UFC 115 Undercard Live Blog
Decisive Round: Round 3: Midway through the round, Sobotta takes Wilks' back. He is trying for a rear-naked choke. Wilks keeps his chin down, not allowing Sobotta to get his left hand under his chin. Wilks reverses and lands in Sobotta's closed guard. Sobotta is doing a good job of not allowing Wilks to posture up, but Wilks does a nice job of landing shots to the body as the round ends.

Claude Patrick def. Ricardo Funch via submission (guillotine choke)
Play by Play: UFC 115 Undercard Live Blog
Decisive Round: Round 2: Funch tries for a single-leg early on, but Patrick does a good job defending it. While they are in the clinch, Patrick grabs a hold of Funch's neck, holds on tight to a guillotine choke, which leads to the tap out. Great debut.

Mike Pyle def. Jesse Lennox via submission (triangle choke)
Play by Play: UFC 115 Undercard Live Blog
Decisive Round: Round 3: Both Pyle and Lennox are trading punches early one. Pretty solid boxing skills shown by both fighters. With a minute left, Lennox lands a nice superman punch. He counters with a left, which seems to have rocked Pyle. Pyle moves to the ground with Lennox in his guard, but as Lennox is trying to land shots, Pyle locks him up in a triangle choke. The choke looks tight, and Pyle makes matters worse by landing elbows to Lennox's head. Lennox appears to be out cold, hasn't tapped, and Pyle is telling the ref he is out. The ref then realizes Lennoz is indeed out.