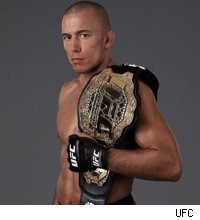 After searching for prospects in the middleweight division, the twelfth season of The Ultimate Fighter will feature lightweights exclusively. 28 lightweights have been selected as candidates for the show to vie for a six-figure contract with the UFC.

Season 12 will follow the same format as this past season. Instead of 32 fighters fighting for 16 spots in the house, there will be 28 narrowed down to 14 plus two wildcards.

UFC welterweight champion Georges St-Pierre will coach one of the two teams against No. 1 contender Josh Koscheck, who earned his spot on the show as well as a title shot by defeating Paul Daley last month at UFC 113. The two will face off later this year for the title in a rematch from UFC 74 in August 2007 that saw St-Pierre take the unanimous decision.

St-Pierre was once a trainer on the fourth season on the show, while Koscheck was a cast member of the first season.