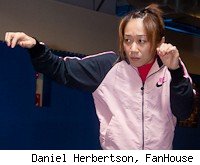 The Fujii-Schneider match-up will air live on FOX Sports Net as part of Bellator 21 this Thursday.

Fujii (19-0), considered by most to be the best pound-for-pound women's fighter in the world, is one of four participants officially confirmed for Bellator's Season 3 women's 115-pound tournament. Also signed are Rosi Sexton, Lisa Ward and Jessice Pene. Four other women will be added to the bracket.

"With our Season 3 Women's Tournament now just three months away, this fight between Megumi Fujii and Sarah Schneider on Thursday gives U.S. MMA fans their first opportunity to see the woman many believe is the best female fighter in the world," Bellator founder and CEO Bjorn Rebney said in a press release issued by the organization. "This fight will be a tough test as she prepares for an extremely strong tournament field. As a fan, I can't wait to watch on Thursday and in August."

The 36-year-old Fujii, nicknamed "Mega Megu," has won 16 of her 19 fights via submission. She is a judo and jiu-jitsu black belt.

Bellator notes that Schneider enters the bout with a 9-3 record, but most respected MMA databases have her listed as 4-4.

Bellator 21 will feature the finals of the organization's second lightweight tournament, Pat Curran vs. Toby Imada.