Kevin Randleman: I'm Not Done Yet 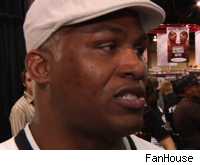 MMA Fighting spoke to Kevin Randleman at the UFC Fan Expo last weekend about his future in MMA. "The Monster," who captured the UFC heavyweight title in 1999, talked about revamping his outlook on fighting and taking some time off to get his career back on track. Randleman recently lost to Roger Gracie at Strikeforce: Heavy Artillery.