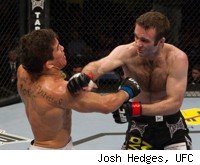 Having faced top welterweights Paulo Thiago and Martin Kampmann in his first two UFC fights, lightweight Jacob Volkmann thinks he might not be the overwhelming underdog when he faces Paul Kelly at UFC on Versus 2 on Aug. 3 in Las Vegas.

"Well, he's got pretty good placement of his hands," Volkmann recently told MMAFighting.com when asked for his thoughts on fighting Kelly. "I wasn't too impressed -- on his bio, it said he has heavy hands -- he doesn't really seem to have the knockout power. But he has good placement, and I don't think he's really fought anyone tough."

Although Volkmann lost the fights against Thiago and Kampmann, Volkmann went the full three rounds in a back-and-forth matchup against Thiago. Volkmann says the losses were important in that they made him realize what he needed to work on, mainly his standup and his control on the ground.

"I got to hold it for awhile before I -- I got a little carried away -- when I fought Paulo," Volkmann said. "I had his back a few times, and got too high and he kind of leg flipped me to my back and he got on top. And that could have been the deciding factor there."

After the losses, Volkmann dropped down to lightweight and scored a split decision win over Ronnys Torres at UFC Fight Night in March. The move down, Volkmann says, "was pretty easy."

"Before, I was walking around at 193. I was 193 nine or eight weeks out, but most of that was just fluids," Volkmann said. "I was drinking a lot of tea and pop. It all came right off."

Volkmann (10-2), the 2008 USA wrestling grappling world champion, is a solid ground fighter with six wins coming by way of submissions, but has shown inexperience in the standup game.

Kelly, also 10-2, likes to say that he always trains for the knockout, so it shouldn't come as a surprise that he'll likely focus on defending takedowns and exploiting Volkmann's in-development striking game.

But come August, Volkmann will try his best to not grant Kelly the opportunity.

"That's his strength and that's my weakness, so obviously on paper he's going to have a better chance if the fight stays standing," Volkmann said. "But that's if it stays standing."