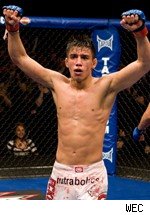 Miguel Torres knows his climb back to a title shot is an uphill battle, especially after back-to-back losses for the first time in his career.

But the former WEC bantamweight champion on Friday told MMA Fighting he hopes to be back in the cage by this fall – and when the time comes, he'll be making a big leap in his training camp.

"I want to fight in August, but there's no guarantee," Torres said after speaking to a crowd of about 100 fans in his hometown of East Chicago, Ind., during Miguel Torres Day festivities in the city. "(WEC matchmaker) Sean Shelby's going to let me know in a couple weeks if it will be August or September. But I've been training since the Montreal UFC and whenever I get the word, I'm going to go up to Firas (Zahabi's) camp in Montreal for two months."

Zahabi is head trainer at the Tristar Gym in Montreal and, perhaps more significant, the head trainer of UFC welterweight champion Georges St-Pierre. But in the last year, Zahabi's clients have started to grow to include such standouts as Jon Jones and Kenny Florian. Torres spent five days training with Zahabi last month during UFC 113.

Torres said his time with Zahabi was enough to prove to him that's where he wants to be for his next training camp.

Torres received an indefinite medical suspension after his last fight, a submission loss to Joseph Benavidez at WEC 47 in which a deep gash on his forehead required post-fight stitching and plastic surgery a week later. But he said he has been cleared to get back to work.

"I got cleared a month after my surgery," Torres said. "One doctor said I could train now, and the other said I had to wait a year. So you had two spectrums – and I'm going in the middle."

The Benavidez loss was the first time Torres had been submitted, and it came on the heels of the first time he had been knocked out, a bantamweight championship loss to Brian Bowles at WEC 42 last August. But Torres said the back-to-back losses didn't mess with his head and instead have him looking forward.

In a 135-pound division where Torres once seemed invincible, firmly planted in the top five on many pound-for-pound lists, his setbacks have also proven the WEC's bantamweight class has no shortage of talent. And that has him wondering if the recent announcement by former featherweight king Urijah Faber considering a drop to 135 was the best idea, despite the prospect of a superfight down the road.

"I think it'd be a great fight," Torres said. "But I think the fight should've happened a year ago or two years ago. Right now, it doesn't make sense for us to fight. I think we need to both get back on track and then make it a big fight where we can both make money. Urijah coming to 135, I don't think that's the WEC telling him to do that. I think that's his own career decision. I think 145's pretty stacked. The guys in there, the skill level's a little bit higher. If he's trying to come to 135, there's a lot of tough guys at 135 too. He's going to have a big surprise there."