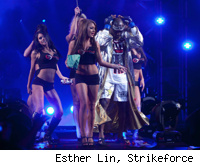 Strikeforce has a busy Summer planned with two events in June and a Challengers show in July, and according to their light heavyweight champion "King" Muhammed Lawal, the organization is headed to Houston for a show on Aug. 21. Lawal confirmed with MMA Fighting Friday that he has been offered to compete on the card, but his opponent is unknown.

When contacted by MMA Fighting, Strikeforce officials wouldn't confirm or deny the possibility of a Houston event in August.

Lawal defeated Gegard Mousasi in April to capture the light heavyweight title in only his seventh pro fight. He told MMA Fighting last week that he would be open to facing Rafael "Feijao" Cavalcante -- considered by most to be the No. 1 205-pound contender -- but would also be interested in moving up a weight class to fight heavyweight Andrei Arlovski.


Share
This would mark the organization's first event in the Lone Star state. It is unclear whether the card would be held at the Toyota Center, home of the Houston Rockets, and there is no mention of an upcoming Strikeforce event on the arena's official Web site.

The event could kick off an exciting month of MMA action in Texas, as the UFC is reportedly looking at holding UFN 22 in either San Antonio or Austin.