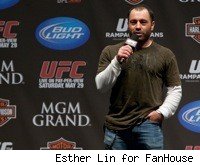 When Joe Rogan was asked at last week's pre-UFC 114 question-and-answer session which fighters he would like to see compete in the UFC, he didn't have to think twice: Alistair Overeem and Nick Diaz.

Rogan gave both fighters very high praise too. He called Overeem "the most dangerous striker in the heavyweight division" and said Diaz was one of the best pound-for-pound fighters in the world.