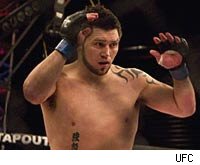 Josh Bryant won again on the latest episode of The Ultimate Fighter, defeating Jamie Yager after two hard-fought rounds in a fight that UFC President Dana White called the best of the season so far.

In an interview with MMAFighting.com, Bryant talked about the instructions he received from coach Chuck Liddell, how he figured out Yager's timing and what he thinks about Yager's failure to answer the bell for the third round. The interview is below.

Michael David Smith: Right before the fight Chuck's final instruction to you was "close quick." Why was that so important to the game plan?
Because of what we had seen from Yager's earlier fights. He showed what he likes to do, which is sit outside and try to kick you when he jumps in and then jump out. I wanted to close the distance as fast as I could.

Through most of the first round, I thought Yager was beating you on the feet, but then you landed a punch late in the round that hurt him. Did you think that really changed how things were going?
I was trying to figure his timing out. I knew he was going to jump in and jump back out a lot. His kicks weren't hurting me at all, though. Honestly, where they were hitting me on my knee it didn't hurt -- not the way it would have hurt if his kicks had hit my thigh. So I was just trying to figure out his timing, and when I finally pulled the trigger I hurt him. Once I got his timing down, and pulled the trigger, I thought, "OK, I've got this."

Toward the end of the second round, you had Yager hurt and you were really putting a beating on him on the ground. How close did you think you were to finishing him?
I thought I was close. I was trying to drop some bombs on him although he did a good job of tying me up and making it hard for me to finish him off.

The judges gave Yager the first round and you the second, and it would have gone to a third round but Yager couldn't answer the bell. Did you realize you had hurt him that badly in the second that he wasn't going to be able to continue?
No. I thought I hurt him when we were on the ground, and I knew he wasn't handling it well because he was yelling at the referee and saying I was hitting him illegally and pulling his hair -- which I wasn't. I was elbowing him and punching him in the face and hurting him, but I didn't think he was hurt so badly that he couldn't go on.

When Yager couldn't keep fighting, his coach, Tito Ortiz, seemed to lose respect for him. Do you lose respect for a guy when he won't answer the bell like that?
Yeah, kind of. It paints a bad picture of your mental toughness if you can't fight through it. And in this game, you've got to be mentally tough.

Dana White called it the best fight of the season so far. How did that make you feel?
I thought that was great. Any time Dana White says something like that you're ecstatic and on top of the world. That tells you that you're delivering the kind of fight he's looking for.

Up next you have a rematch with Kris McCray. Were you happy with that pairing, to have another fight with someone you had already beaten?
Absolutely. Any time you beat a guy you feel like you kind of figured him out and you tend to think that will give you a leg up on the guy for the next fight.