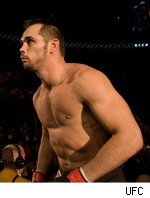 Five years ago, Rich Franklin and Chuck Liddell were ruling the UFC one division apart, with Franklin atop the middleweight class and Liddell knocking out anyone who stepped up to his 205-pound throne. Though we've seen a few champion vs. champion matchups, a Franklin-Liddell matchup at the time was never talked about.

But don't think Franklin didn't wonder what it would be like to step into the cage with "the Iceman."

"I always thought about it that," Franklin said on the most recent edition of Inside the Ultimate Fighter. "I wondered what it would be like to fight this person or that person, but I never thought the fight would materialize because I was a 185-pounder, he was a 205-pounder. Both weight classes at the time when we were champions had enough contenders in them that you didn't have to worry about who you were going to fight next to defend your title. Neither one of us needed to."

Franklin will have to wonder no more. After Tito Ortiz was removed as a coach on season 11 of The Ultimate Fighter, "Ace" got the call to fill in and ultimately face Liddell at the end of the season in the main event of June 12's UFC 115. It was an easy decision to make.


Share
"It's Chuck. Chuck's already a UFC Hall of Famer and UFC legend," he said. "He's got a who's who of victories. Of course recently he's had a little bit of a rougher road, but it's Chuck Liddell."

The 35-year-old Franklin said the time away from the cage since his Sept. 2009 loss to Vitor Belfort allowed him to refresh and recharge his body. The break was a long time in coming, as he was already thinking about taking time off, even before taking the Belfort fight.

"The only thing I never really wanted to do was the Vitor fight," he said. "Before that fight I really wanted to take some time off, and against my better judgment I went ahead and fought the fight, which I shouldn't have."

Franklin said that he didn't know that he would actually be replacing Ortiz until he got to Las Vegas, as UFC President Dana White initially called him about the fight, and other details weren't worked out until later.

On set, Franklin was impressed with Liddell, saying "he was in the best shape I've ever seen him in in his entire career, even the younger Chuck." Franklin, meanwhile, said he has resigned himself to being one of the smaller light-heavyweights, saying he's up for the challenge. His weight is around 215, up a few pounds from when he cut down from 208 to make the middleweight limit of 185.

In the last few days before his UFC 115 return, Franklin is ready and excited to get back to the octagon.

"It's a good opportunity, and I like the matchup," he said.