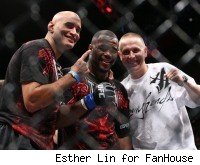 Everyone knows the light heavyweight division is the marquee weight class in the UFC, but I don't know if everyone realizes the extent to which that's true. Consider this: When Jon Jones and Vladimir Matyushenko step into the Octagon on August 1, in the main event of the next UFC show on Versus, it will be the 12th time in just over 10 months that the UFC has put on a light heavyweight main event. The UFC's other four weight classes will have combined for just seven main events during that time.

But of all those light heavyweight fights, none had the mainstream media appeal or the pay-per-view prowess of the one we got on Saturday night, when Rashad Evans beat Rampage Jackson in the main event at UFC 114. I thought it was an exciting fight and that Evans clearly deserved the unanimous decision victory, and that's why it's so surprising to me that so many fans are still so down on Evans.

Evans is fighting in the biggest fights, in the UFC's top weight division, and he just keeps on winning: He's 5-1 since he became a main eventer, losing only to Lyoto Machida. I think Evans is one of the sport's truly elite athletes, and I think he absolutely deserves the title fight he'll get later this year against Shogun Rua -- a fight that, if he wins, will move him all the way up to the top of my list of the Top 10 light heavyweights in MMA, which is below.

(Editor's note: The individual fighter's ranking the last time we did light heavyweights are in parentheses).

1. Shogun Rua (3): The light heavyweight champion of the world now knows who he's getting in his first title defense, and I like the way he matches up with Evans. I see Shogun stuffing Evans' takedowns and beating Evans on his feet in a fashion similar to the way Lyoto Machida beat Evans.

2. Anderson Silva (2): I still rank Silva, the middleweight champion of the world, as a light heavyweight, and I think he'd be the best possible opponent for Rua at 205 pounds. Unfortunately, we're probably not going to see Silva fighting at 205 any time soon, as he has to defend his middleweight belt against both Chael Sonnen and Vitor Belfort first.

3. Lyoto Machida (1): There's talk that the former champ will get Rampage next. To me, that's an absolutely perfect matchup for Machida: I don't think Rampage's hands are fast enough to lay a finger on Machida.

4. Rashad Evans (4): So what is it that people don't like about Evans? I guess some fans think his reliance on his wrestling makes him boring, but I've never felt that way: I think Evans' fights are always a pleasure to watch. To each his own.

5. Jon Jones (5): I know some folks think I have Jones ranked too highly, and it's true that he hasn't accomplished as much in the sport as most of the other guys on this list, but I just believe Jones is a uniquely talented fighter who would be a threat to anyone at 205 pounds. I have a feeling that within a year, No. 5 will seem to low for Jones.

6. Rampage Jackson (7): Rampage is one of the most exciting fighters in the sport, and I'd love to say he'll be back on top some day, but I have my doubts that he will. He's about to turn 32 and looks to me like he's slowing down a bit. It's already been more than a year since he last won a fight, and if he fights Machida in the fall, he's probably staring at an 0-2 record for 2010.

7. Muhammed Lawal (8): The Strikeforce light heavyweight champion, King Mo is the only non-UFC fighter in the Top 10. Considering the UFC's stranglehold on the 205-pound talent in MMA, I think Strikeforce is going to have a very difficult time finding good light heavyweight title contenders.

8. Thiago Silva (9): Silva is a little overlooked in the light heavyweight pecking order, but he shouldn't be. His only losses are to Evans and Machida, and between those fights he destroyed a game Keith Jardine. Next he'll fight Tim Boetsch at UFC 117.

9. Forrest Griffin (6): A shoulder injury forced Griffin out of a fight with Antonio Rogerio Nogueira at UFC 114. Once his shoulder is healthy in the fall, he'll likely fight Nogueira -- and with a win, he'd have to be considered for a title shot, considering that he already has a win over Shogun on his record.

10. Antonio Rogerio Nogueira (10): Nogueira was lackluster in his split decision win over Jason Brilz. Nogueira has a great mix of talents and can hurt opponents with his boxing and his world-class jiu jitsu,but Brilz showed that a talented wrestler can take him down and control him on the ground.