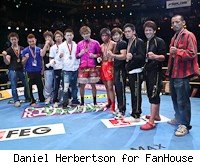 FEG announced the match-ups Thursday for the 2010 Under 63 kg Japan Tournament Finals and three matches for the Under 70 kg World Tournament to be held on July 5th at Yoyogi Stadium 1st, Tokyo, Japan.

The final of the 63 kg tournament is to be an eight-man, one-night affair meaning that three of the 11 winners in the opening round have missed out on a finals slot and no reserve fights have been announced.

Full fight card is available after the break.

Daisuke Uematsu will try to replicate his first-round KO of Jae Hee Cheon when he faces Yoshimichi Matsumoto. Matsumoto drew one of the tournament favorites in Haruaki Otsuki, and was looking like losing a decision, taking powerful shots to the body until Matsumoto scored a knockdown. Otsuki rallied and attempted to return the favor, but Matsumoto hung on and ultimately won the judge's favor with the lost point.

Yuta Kubo who took out Daiki "DJ.taiki" Hata with his brutal kicks to the body, will face Keiji Ozaki. Ozaki took a questionable judges' decision over Kosuke Komiyama in one of the best fights of the opening round.

Two of the tournament favorites will face off with Naoki Ishikawa taking on Kizaemon Saiga. "Naokick" utilized his kicks to take a comfortable decision over Yuto Watanabe in the first round but sustained a nasty cut above his eye in the closing minutes of the last round. Kizaemon Saigo clearly played up to his "heel" role in the tournament, beating up and taunting prohibitive fan favorite Fire Harada in the opening round.

Tetsuya Yamato is coming off one of the biggest wins in his career against Masahiro Yamamoto and will take on Yuki. In the first round of the tournament, Yuki engaged in a war of words with "Kyoken" Yuji Takeuchi, and was losing the war in the ring, until a right high kick sent his opponent to the canvas in the second round.

Koya Urabe, Toshiki Taniyama and Shohei Asahara were all victorious in the opening round of the 63 kg Japan Tournament, but were not selected to advance to the final eight. No reserve match has been announced as yet so it is possible that two of these fighter's may be included.

Only three fights from the 70 kg Final 16 are set to take place in Japan. The remaining bouts are most likely going to take place in Europe although no dates or further details have been announced.

With Masato retired, Yoshihiro Sato and Yuya Yamamoto will be looking to replace him as the face of K-1. Yamamoto was a surprise final four participant in 2010, bowing out to eventual champion Giorgio Petrosyan. He couldn't replicate his success in the 2010 MAX Japan tournament, losing a unanimous decision to Hinata. Yoshihiro Sato has won the Japan Tournament twice but has not yet been able to make the step up to take the WORLD MAX tournament. Sato is coming of a loss in It's Showtime to Thai fighter Pajonsuk.

Cosplayer and Japan 70 kg MAX Champion Yuichiro "Jienotsu" Nagashima will face MMA representative Andre "Dida" Amado. Dida gained prominence in the K-1 world after a slugfest with two time WORLD MAX Champion Buakaw Por Pramuk but has failed to follow up on that fight, going 0-4 since that bout, most recently with a decision loss to KJ Noons.