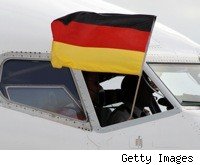 Despite the fact that UFC programming was banned from German television earlier this year, Dana White said after UFC 114 that the organization has not given up on the market and expects to bring another live event to Germany sooner rather than later.

"We are doing a show," White said. " Listen, one thing we don't do is we don't back down, we don't curl up and climb into the closet when things don't go good. We're going to come out, guns a-blazing, we're going to keep going.

UFC 99 was held in Germany last June. The Bavarian state office for new media (BLM) announced in March that UFC programming was banned from German airwaves.

Watch below as White discusses the UFC's future in Germany.