What Lessons, if Any, Can Todd Duffee Learn from Upset Loss? 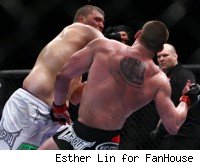 Perhaps no fighter has ever etched himself into UFC lore with more speed and efficiency than Todd Duffee. That's both good and bad, as it turns out.

In his first fight, he notched the quickest knockout (officially, anyway) in UFC history when he finished Tim Hague seven seconds into the first round. In his second bout at UFC 114, he managed to have the most dominating striking performance of any fighter who ever went on to lose the fight via stoppage.

At least, that's the story according to Fight Metric, which reviewed the stats from the fight to reveal that Duffee landed 51 "significant strikes," while Mike Russow landed only 14.

Unfortunately for Duffee, one of those 14 was a right hand that caught him perfectly and sent him crashing to the canvas.

So what did Duffee learn from the loss, which may very well go down as one of the most shocking turnarounds in MMA history? According to what he wrote on The Underground Forum earlier this week, quite a bit:

"It was on the temple I felt the shot...it just shut down the cns system couldnt use my arms to catch my fall or anything i was watching everything till my head hit the canvas(which may have put me out)i blinked and he hit me with a hammer fist....the way i fell made it look much worse than it was...I wasn't gassed i was more frustrated and trying to stick to the game plan should of threw that out after the first 30 seconds ...my game plan was horrible......i wasn't snapping punches instead i was muscling them shoudl of kicked should of grappled should of fought....I'll be back and show I am more than capable of wrestling etc"

Two things come to mind after reading Duffee's take on the knockout:

1) What a vivid and kind of terrifying description of what it's like to be cold-clocked in a pro fight. Being awake enough to see what's happening to you and yet not capable of moving or doing anything about it is the stuff of nightmares, as well as a few Hollywood pseudo-horror movies.

2) It's good that he's able to take something positive from the loss and learn from it, but he might be overthinking the cause just a bit.

Duffee didn't lose because he had a horrible game plan. Assuming his game plan had something in it about landing nearly five times as many strikes as his opponent, it appeared to be working just fine. He just got a little careless and a tad too predictable with his punch combos, and the lightning strike of the four-ounce gloves did the rest.

Duffee could be forgiven for feeling frustrated. Short of sneaking a steel chair into the Octagon, there's nothing else he could have hit Russow with, and yet the guy wouldn't quit. But as long as you're standing toe-to-toe and trading leather in an MMA fight, there's always the chance that the one perfect punch will find its mark. That much will never change, no matter how solid your game plan is.

It must be tempting to look back and think about all the things he could have done differently, but at the end of the day it's like a friend of mine is fond of saying: With people, the off-switch is generally located somewhere on the face.