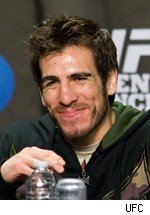 UFC lightweight Kenny Florian will handle the commentating duties for WEC 49: Varner vs. Shalorus on the Versus cable network.

MMA Fighting confirmed the news Tuesday with sources close to the WEC.

Florian is no stranger to the microphone. He currently serves as an analyst for "MMA Live" on ESPN2 and ESPN.com. He also filled in for Joe Rogan at UFC 83 and UFC Fight Night 19 alongside Mike Goldberg, and for Frank Mir alongside Todd Harris at WEC 41.

This will be the third straight WEC event with a different color commentator. Mir, a former UFC heavyweight champion, had been a regular in that role.

UFC light heavyweight Stephan Bonnar filled the seat at WEC 47 in Columbus, Ohio, in March. Bonnar is currently training for a July 3 rematch with Krzysztof Soszynski at UFC 116, which would apparently make a commentating gig two weeks prior a difficult task.

And as what Zuffa president Dana White called the company's "pay-per-view team," Goldberg and Rogan handled WEC 48, the promotion's April pay-per-view debut, which was devoid of any WEC logos or references and simply was branded as "Aldo vs. Faber."

Former UFC lightweight champion Jens Pulver had been considered for the role, but as MMA Fighting reported Wednesday, Pulver has been released from the organization. Pulver has done color commentary in the past for both the WEC and UFC.

Florian won't be the only high-profile change for the event. UFC announcer Bruce Buffer will handle fighter introductions after WEC regular Joe Martinez stepped away from the company for another opportunity. Buffer also worked the "Aldo vs. Faber" card.

Florian has won two straight after being submitted by former lightweight champion BJ Penn at UFC 101 in a title fight last August. He rebounded and submitted Clay Guida at UFC 107, then Takanori Gomi at UFC Fight Night 21. His last three wins have all been by rear naked choke. He reportedly will next fight Gray Maynard at UFC 118 in Boston on Aug. 28, the UFC's Massachusetts debut. Florian is a Massachusetts native and resident.

WEC 49 will be the promotion's first card in Canada and the third Zuffa event on Canadian soil over a six-week period. UFC 113 was in Montreal on May 8; UFC 115 will take place in Vancouver on June 12.