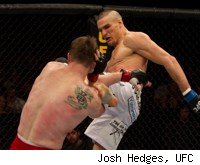 Spike TV has announced that it will show Kendall Grove vs. Goran Reljic and Brendan Schaub vs. Chris Tuchscherer on July 3 prior to the UFC 116 pay-per-view broadcast.

The UFC has been showing two live fights on Spike before most of its pay-per-view shows since September, and that's one of the best developments in MMA over the last year. More live MMA on TV is always a good thing, and a sign of the growth of the sport.

Spike and the UFC usually try to put Ultimate Fighter veterans on the free two-fight cards, and UFC 116 is no exception. Grove is the Season 3 Ultimate Fighter winner, and is trying to rebound from a second-round TKO loss to Mark Munoz at UFC 112. Reljic suffered the first loss of his career against C.B. Dolloway at UFC 110.

Schaub is also an Ultimate Fighter veteran, having made it to the finals of Season 10 where he lost to Roy Nelson. He rebounded nicely from that fight by defeating Chase Gormley with a 47-second TKO in March, and now he'll fight the enormous Tuchscherer, a training partner of Brock Lesnar who won his last fight, against Tim Hague, at UFC 109.

In the main event at UFC 116, Lesnar will defend the heavyweight title against Shane Carwin.