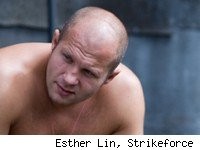 It's mailbag time again, fight fans. After sifting through your questions on Twitter and discarding the ones that focus mainly on my personal life and/or sad attempts at humor, I've found some queries that are actually worth answering. How about that.

If you want to ask your own, look me up at @BenFowlkesMMA and let me know what's on your mind. I promise that I will only mock you publicly if you're really, really asking for it.

@steampunk22 lots of fans making noise about Penn/Edgar rematch. Penn dominated for years do you agree that is fair for auto rematch?

Normally I get a little annoyed at automatic rematches, even in the case of a champion who's been as dominant as "The Prodigy" has at 155 pounds. We want to see fighters face new, interesting challenges instead of rehashing the same battles over and over again. But in this case, it's the right thing to do.

For one, the fight was so close it easily could have gone either way. Perhaps more importantly, it just didn't seem like we were seeing the B.J. Penn that we're used to. He rarely went on the attack and allowed Frankie Edgar to dictate the pace of the fight, which is a major departure from his other lightweight fights.

The truth is, Edgar needs this rematch more than Penn does. If he's going to be regarded as the legitimate lightweight champ, he has to prove that he didn't just catch Penn on a bad night.

@MarkOhrenberger what kind of potential went unrealized in Lee Murray as a fighter due to his legal issues?

First of all, legal issues? That's what you're calling it? Legal issues are when you have a bunch of outstanding parking tickets. DUI, shoplifting, driving on a suspended license. Those are legal issues. Lee Murray was the supposed "mastermind" of the largest cash heist in Britain's history. Calling that a legal issue is like calling Bill Gates a computer nerd.

But in answer to your question, we'll never know. Murray was an exciting, explosive fighter, but he also only had twelve fights (not counting street brawls), the last of which came in 2004. MMA was still a somewhat different sport back then, so it's impossible to say what Murray might have become if not for his armed robbery ambitions. I guess that's what makes the whole thing so disappointing, but also fascinating.

@aarondaane Can you do a short pro and con for the existence of a fighter's union? I'm unsure which side to go on.

Pro: Stronger negotiating positions for fighters, which means more money and better deals; full-time health benefits and some sort of retirement plan; status of older, more established fighters keeps the younger, newer ones from being exploited.

Con: Different organizations would necessarily strike different deals with the union, thus increasing the chance for conflict and chaos; squabbles with management could mean the MMA equivalent of a cancelled World Series; as fighter pay goes up, so too may ticket and pay-per-view prices.

In summation, fighters probably need something like this, but the ones who can realistically make it happen are the ones who need it the least. It's going to take a few unselfish guys at the top who are willing to risk their own gravy trains in order to help people they may never know. Think there's anybody like that out there?

@beewsee Question: How much does Fedor's stock drop if he was to lose to Werdum? Would he still have the same drawing power?

Much of the Fedor Emelianenko brand at this point is inextricably tied to his perfect record (before you argue with me, save it, that loss in Rings was the result of a cut from an illegal blow and everyone knows it). If he loses to Fabricio Werdum, who is currently about a 5-1 underdog, that mystique is shattered. His career could still go on and his image would be repairable, but no longer would he be sitting on his heavyweight throne looking down at the rest of the division.

The upside for fans is that a loss to Werdum might result in more frequent fights for Fedor, and against more competitive opponents. His M-1 management team might even relax some of their demands in order to sign with the UFC if they feel that the only way back to the top is for Fedor to trounce some big names.

Of course, that's all dependent on a loss in a fight where Fedor is a 10-1 favorite. Hard to see that happening.

@Filthy_Slunt Do you view Pat Barry as a legit heavyweight contender? What are his pros & cons? Think he'll beat Cro Cop? Thanks.

For starters, if you're knocking out experienced opponents in the UFC, you're already legit in my book. But does that mean Barry has a UFC heavyweight title in his future? I seriously doubt it.

Look, Barry is a great kickboxer, and he's high on the list of guys who I would least like to take a leg kick from. But two things are stopping him from climbing to the top of the division: size and grappling ability. He lacks both, and one of them he can't do much about.

At 5'11 and 237 pounds, he should cut to light heavyweight. He'll still need to become a much better wrestler if he's going to stay on his feet and put his best skills to good use, but at least then he won't have to worry about being overpowered by the monsters in the heavyweight class. At 205 pounds, and with improved takedown defense, he could be a serious problem for plenty of guys on the UFC roster.

@DLRichardsonJr Some DREAM-StrikeForce matches you would like to see? Also, why is Coker not interested in co-promoting with Bellator?

Honestly? After Shinya Aoki, Melvin Manhoef, and Marius Zaromskis all got knocked down a peg in their Strikeforce outings, it's starting to seem like Strikeforce is bringing way more to the table than Dream is. I guess I wouldn't mind seeing Minowaman come over and fight, but that's more for pure entertainment reasons than competitive ones.

As for a co-promotion between Strikeforce and Bellator, that's a different ballgame. Bellator is trying to knock Strikeforce off as the number two MMA organization in the U.S., which means there are more reasons for Bellator to push this than there are for Strikeforce. Scott Coker is a reasonable guy who can be talked into a good idea, but I don't blame him for not wanting to rush in and help Bellator make a name for itself before he considers all the possible angles.

@Boco_T is it really worth complaining about MMA rules? Are there too many people involved to the point that they won't change soon?

As "Big" John McCarthy has said in the past, at this point MMA will only add, and never subtract rules. In other words, if you're hoping to see knee strikes to the head of a downed opponent become legal, don't hold your breath. If you're hoping to see elbow strikes become illegal, you've at least got a chance. This is because, for liability reasons, no one wants to risk removing rules and making the sport (at least in the eyes of some outside observers) more dangerous. That's understandable.

What MMA could use, however, is some clarification on existing rules, particularly those surrounding accidental fouls. Why should a fighter get five minutes to recover from a groin shot, but no set time limit to recover from an eye poke or illegal knee? And why does the penalty for grabbing the fence vary so wildly depending on the referee and the situation?

Dramatic changes to existing rules are extremely unlikely and mostly unnecessary, but we could at least get a clearer view of how existing rules will be implemented from one event to the next.