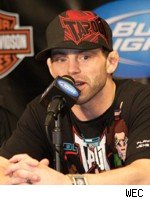 A report first surfaced nearly two weeks ago that the World Extreme Cagefighting featherweight, a former UFC champion and longtime fan favorite, had been let go. However, Pulver's agent, Monte Cox, told Versus.com that he hoped his client would remain with the company in a broadcasting capacity.

But White, Zuffa's president, said following the UFC 114 press conference on Saturday that will not be the case.

"He has been released," White said. "We had talked about Jens being a part of the WEC somehow, but he's not broadcasting."

Pulver, who has filled the analyst seat for both the UFC and WEC on past broadcasts, had hoped to be a part of the on-air team for the WEC's next event, WEC 49, in Edmonton, Alberta, Canada.

On Thursday, shortly after he arrived in Las Vegas for commitments at the UFC Fan Expo, Pulver told The Times of Northwest Indiana he had not yet been informed personally by Zuffa that he had been released. But he said he has no choice but to continue fighting.

Pulver (22-13-1, 1-5 WEC, 6-2-1 UFC) was the first lightweight champion in UFC history and is one of only two fighters to beat BJ Penn at 155 pounds. Pulver won his WEC debut at WEC 31 against Cub Swanson, but since then he has lost five straight – including the last four in the first round. He last fought at WEC 47 in Columbus, Ohio, in March, losing to Javier Vazquez by armbar.