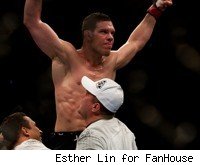 Seconds after watching his longtime teacher fall to Matt Hughes at UFC 112 in Abu Dhabi, Ricardo Almeida jumped into action. Refusing to let the moment slip by, Almeida quickly cornererd UFC matchmaker Joe Silva as soon as he stepped into the cage -- and before the official decision was read -- and made his pitch.

"I was like, 'Please let me fight Matt Hughes,'" Almeida told MMA Fighting. "I said, 'That's the fight I want. If you guys think it makes sense, let's do it.'"

It wasn't just watching his teacher Renzo Gracie lose that spurred Almeida to action. In fact, measuring himself against Hughes had been a possibility that had simmered in his mind for a decade, since 2000, when he lost a close grappling match on points to Hughes in the 99kg-and-under division of the ADCC Submission Wrestling World Championships.

That loss has stuck with Almeida all the while.

"As a competitor I just don't like losing," he said. "Whether it's in the octagon, a jiu-jitsu tournament or even in a chess match, I'm going to want to get him back."

Ironically, it never seemed he'd get a chance.

While the two were competing in MMA before the sport's modern era of sanctioning and regulation, their careers since that 2000 grappling match have not exactly intertwined. While Hughes has been a UFC mainstay, Almeida spent time in Pancrase, PRIDE and then briefly retired for a while to run his jiu-jitsu academy. When they have been in the UFC at the same time, they've been in different weight classes, with Almeida as a middleweight and Matt Hughes as a welterweight.

Earlier this year, though, Almeida -- who never really cut much weight to make 185 -- decided 170 was the right home for his frame. So despite two straight wins as a middleweight, he made the somewhat surprising decision to move down a weight class.

In his welterweight debut at UFC 111, he choked out Matt Brown to improve his career record to 12-3.

After watching his friend Matt Serra and his coach fall to Hughes in back-to-back fights, it all seemed to make sense. Almeida asked for the fight, Silva liked the idea and Hughes accepted. The fight will be at UFC 117 in Oakland, Calif.

"Honestly I never thought about fighting him in MMA before," he said. "But after I dropped to welterweight, here we are."

Though Almeida admits his maiden voyage to 170 was tough, he's doing something that sounds counterintuitive. Instead of losing weight, he's putting on muscle and size. Despite a drop in weight class, he's getting bigger.

"I changed some things in my training," he said. "I brought in a nutritionist and someone to watch over the weight cut, so when I fought Brown I was five pounds heavier than when I fought Kendall [Grove]. When I fought Kendall I was 187, when I fought Brown I was 192 walking in the ring. Ever since the Brown fight I've been lifting weights and working on things outside of martial arts training. I'm probably 198 right now. Matt is a strong guy and I don't want to be outmuscled by him. Putting on a couple pounds I think is going to help me. We'll see how I deal with the weight cut but I'm confident it's going to be no problem."

Throughout his career, Hughes has made a living being the bully and taking down opponents at will with his physical wrestling style. To combat that, Almeida has taken another unusual step, inviting the nationally ranked Rutgers University wrestling team to practice at his Ricardo Almeida Brazilian Jiu-Jitsu Academy in Hamilton, N.J.

The connection was made between Almeida and Rutgers' wrestling by UFC lightweight champion Frankie Edgar, who moonlights as an assistant coach for Rutgers.

"I'm learning a lot week-in and week-out," Almeida said. "I don't know if I've gotten a single takedown yet since I've started doing the training, but I seem to be getting taken down less and less. That's the key."

Almeida knows it won't be as simple as that to beat Hughes (44-7). The newest member of the UFC Hall of Fame got there as much for his will to win as his crushing wrestling and ground game. And though some people have suggested the 36-year-old Hughes' best days are behind him, Almeida knows that's a chance he just can't take.

"It's a chance to be in the spotlight fighting a legend like Matt Hughes and pushing my game to a whole new level," he said. "He's probably one of the best wrestlers ever, for sure one of the best welterweights ever, and I'm preparing to fight that guy, the guy that beat the who's who of the division. I'm very excited about it."