Would Five Judges Make a Difference? 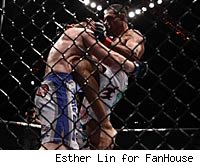 On Saturday night in Las Vegas, thousands of fans booed when two out of three judges awarded Antonio Rogerio Nogueira a split decision win over Jason Brilz at UFC 114. Few if any of those fans knew that a few hours earlier in Amsterdam, a different fight promotion had used a different system of judging that might have given Brilz the victory that most fans thought he earned.

That fight promotion in Amsterdam was the It's Showtime kickboxing organization, and the different system of judging was quite simple: The show used five judges instead of three. Maybe two more judges would have gone for Brilz over Nogueira, and a five-judge panel would have given Brilz a split decision win at UFC 114.

The reasoning for having more judges is, basically, that you're less likely to get a bad decision if you've got two more sets of eyes on it. Bryan Alvarez and Dave Meltzer discussed the matter on Wrestling Observer Radio (via FightOpinion.com):

Alvarez: "Do you think three judges are enough in an MMA fight in an Octagon or cage? Given the shape and size of the area, are judges able to see enough of the action if it's on the other side to be accurately judge the action? The action is on the ground and up against the cage, I'd imagine it might be difficult to see exactly what is going on. Maybe five might be the answer."

Meltzer: "I think three comes from boxing, just like everything that they do is fricking comes from boxing as opposed to like coming up with something that's more conducive to the sport. ... Five judges is probably better than three."

I'm not opposed to the idea of using five judges, but I'm not convinced that it's much of an answer. At least among fans I hear from, criticism of MMA judging reached its crescendo in the fall of 2009, when three straight Zuffa main events were decided by questionable decisions: Ben Henderson over Donald Cerrone at WEC 43, Lyoto Machida over Shogun Rua at UFC 104 and Randy Couture over Brandon Vera at UFC 105.

All three of those decisions were unanimous, however, which means that having five judges wouldn't have made any difference. Maybe if they had used five judges for those fights, the two additional judges would have seen the fights the way most of the fans at home did: for Cerrone, Shogun and Vera. But that wouldn't have mattered. Henderson, Machida and Couture still would have won split decisions.

Ultimately, I think what we need isn't more judges per fight, it's a larger pool of qualified, competent judges for the athletic commissions to draw from.