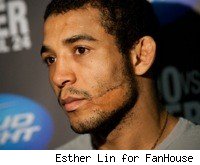 Following Jose Aldo's dominant performance against Urijah Faber at WEC 48, Dana White said that he would like to see the featherweight champion compete with the top lightweights in the UFC.

However, when White met with reporters following UFC 114, he said that he would like to see Aldo defend his title "a couple more times" and show more of a killer instinct before moving up in weight class.