UFC Moving Forward With Plans for Afghanistan Event Around January 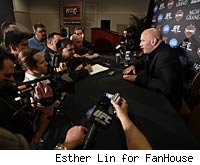 Continuing their long history of support for the military, the UFC is moving forward with plans for a full event to take place on a U.S. base in Afghanistan.

UFC President Dana White said the company is currently in talks with key government and Armed Forces personnel to make the event happen.

Though White initially said that most details surrounding the proposed event where up in the air, he told a U.S. serviceman during a recent UFC 114 question-and-answer session that the promotion was discussing the possibility of it taking place "in the ballpark" of January 2011.

One thing he seemed certain about, however, is that the event will not be broadcast live around the world, saying that "definitely" would not happen because of restrictions on what equipment can be transported to the base. If the UFC is allowed to bring in recording equipment, it would be taped for broadcast on Spike TV.

"If we're going to go in there and spend the money to shoot it, it's got to be TV quality," he said. "It's got to be up to our standards to be shown on television. In a perfect world, we show this on television, we show troops in between each round, guys sending messages back home. If we can do what we want to do, this will be an incredible event."

White added that it was possible the event might not be recorded or broadcast at all, but that it will go forward regardless.

The UFC has hosted a pair of events for the American troops. In 2006, the company's UFC Fight Night 7 took place on Marine Corps Air Station Miramar near San Diego. The audience consisted almost solely of U.S. Marines. In 2008, UFC hosted Fight for the Troops, an event that helped raise money for the Intrepid Fallen Heroes Fund, which assists wounded veterans and families of troops who perish in service of their country. The event raised over $4 million.

Many UFC fighters have served in the U.S. military, including five-time champion Randy Couture, Brian Stann and Tim Credeur, and others have visited U.S. troops in Afghanistan and Iraq, including BJ Penn, Tito Ortiz and Mike Swick.