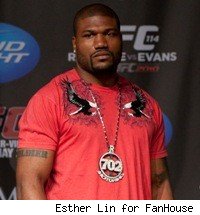 During the same weekend that Rampage Jackson fought Rashad Evans at UFC 114, he was the subject of a Los Angeles Times profile that didn't portray him in the most flattering light.

Too often, negative newspaper profiles of mixed martial artists are filled with inaccuracies and ignorance, and biased in a way to portray MMA in the worst possible light. This profile of Jackson, however, actually treated him quite fairly. And the ignorance on display in the Los Angeles Times article isn't the writer's, it's Jackson's.

The profile reveals that Jackson sprinkles a casual homophobia into his conversation, throwing out the kinds of comments that should be considered out of bounds in decent society. Some examples:

-- Describing a confrontation Jackson had with a crew member on The A-Team, the LA Times reports that Jackson "threw the guy out, shouting him down with every conceivable gay slur."

-- Jackson is quoted as saying, "Acting is kind of gay. It makes you soft. You got all these people combing your hair and putting a coat over your shoulders when you're cold."

-- Jackson, who lived in Vancouver while filming The A-Team, is quoted as saying, "Vancouver strikes me as a San Francisco-kind of place."

Although Jackson comes across at times as sullen and angry, he can also be one of the most engaging fighters in MMA. It's disappointing that someone with the ability to be one of the sport's best ambassadors would cheapen his own public discourse by engaging in homophobic slurs. Jackson is better than that, and he deserves to be scorned for such comments.