Not Retired, Phil Baroni Will Look to 'Enjoy' UFC 118 Fight 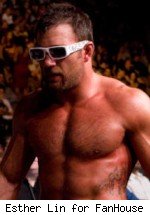 After a loss in his UFC return last November and a premature retirement announcement last Friday, Phil Baroni says he will make sure he enjoys himself when he takes on John Salter at UFC 118 on Aug. 28 in Boston, Mass.

"It was a do-or-die [my last fight]," Baroni said Tuesday on The MMA Hour. "This fight I'm not going to look at it that way. I'm going to go there and enjoy it and not put the pressure on myself."

Last November, returning to the promotion where he first made his name in 2002, Baroni said he felt as if his back was against the cage. And just last week, the pressure was elevated to the point where the 34-year-old was ready to call it quits.

However, it was simply a false alarm.

"Bad day. just a bad day," Baroni said. "I was at Wanderlei Silva's gym and I just had a bad day. Lots of tough guys there ... I'm not retired yet."


Baroni will try his hand at middleweight again after two welterweight losses last year to Sadollah and Joe Riggs. His move back up can also be attributed to a recent weight gain, he admits.

"And to be honest, I gained a lot of weight and I wouldn't be able to make 170 in a long time," Baroni said.

Baroni says he's only seen two of Salter's fights since there's limited footage on the southpaw wrestler. Less certain is Baroni's camp, as he says he doesn't know as of now which gym he plans on setting up his fight preparations.

Salter is 1-1 in the UFC with his lone Octagon win due to a freak accident when his opponent Jason MacDonald broke his leg midway through the first round. It wasn't exactly a win to boast about, and Salter caught flack for his post-fight celebration. No stranger to controversy himself, Baroni was understanding of Salter's behavior.

"I've done some dumb s--t after fights though, so what do I know?" Baroni said. "It was weird though, real weird."

When it comes to sports rivalries, there may be none bigger than New York vs. Boston. Although he received a warm welcome at UFC 106, Baroni, "The New York Badass" is expecting to hear it from the crowd when he enters the TD Garden.

"I'm expecting to get boo'd. I'm used it," Baroni said. "The last UFC was the first time in a long time I was cheered. I felt like I was the crowd favorite ... Even though I loss, it was great."