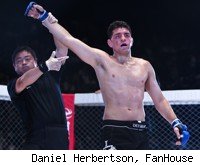 Nick Diaz, a black belt in Brazilian jiu-jitsu, doesn't always find the opportunity to show off his submission techniques and recently admitted that he is "a little bit jealous" that Shinya Aoki has been the one to gain notoriety for finishing opponents on the ground in dazzling fashion.

"That's why I've always wanted to fight Shinya Aoki," Diaz revealed Saturday during the Dream.14 post-fight conference. "I don't want to say I was a big Shinya Aoki fan, but it's just that I felt like he got out and was able to do a lot of the tricks that I like to do before I was able to do them. I guess you can say, a little bit jealous in a way that he was making that sort of show before I was."

Despite his jiu-jitsu pedigree, entering Dream.14, Diaz only submitted an opponent once since his gogoplata (later changed to a no decision) over Takanori Gomi at PRIDE 33 in February 2007.

Diaz says his own lack of submission opportunities can be attributed to his strength in boxing, chalking up Aoki's frequent mat time during a fight as a necessity, as opposed to an option due to Aoki's lack of an overall MMA game.

"[Aoki] doesn't really have standup so he just goes for what he does and he finishes like that," Diaz said. "I feel like if that was all I could I do, I'd finish all the time too. But I go ahead and throw punches."

Since Diaz was the one to bring up Aoki, he was asked if he would move down from 170 pounds to fight the Dream lightweight champion.

"Yeah, I would imagine if the pay was right. It's going to be a lot of hard work regardless having to lose weight or not. On account of that, I would ask for more money," the Strikeforce welterweight champ said with a chuckle.

Diaz says he loves fighting for Dream and plans on returning -- but only if it's inside a ring. Diaz, who submitted Hayato "Mach" Sakurai with an armbar on Saturday, said he felt uncomfortable with Dream's White Cage and once again expressed his preference in fighting inside a ring over a cage.

"I like fighting in the ring, [but] probably not if it's in this cage again," Diaz said. "I don't like the way the cage is set up. I think it's really dangerous that the metal comes up about three inches off the ground. People were putting their foot on it. I can see it. And I was worried about being taken down and landing backwards with my elbow. and damaging my elbow or even my head. Even when I was on the bottom, that was in my head was that my head was going to touch that thing.

"I really appreciate and I really want to give a good shout out to Kazushi Sakuraba for what he said on his entrance (Sakuraba placed the words "WE LOVE RING" within his video package)," Diaz continued. "Cause I try to say that every time I get in front of a camera or microphone, is that, that's why I come here to fight in a ring, under the PRIDE/Dream original rules and scoring criteria. I just love the way that it works. and I just think that's the way I think fighting and mixed martial arts should be."

With the win over Sakurai, Diaz improved to 22-7 and has won and finished his last seven fights.