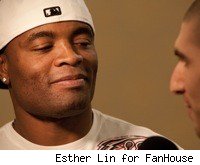 MMA Fighting spoke to Anderson Silva recently about the fallout from his controversial victory over Demian Maia at UFC 112 and his upcoming fight against Chael Sonnen at UFC 117.

The UFC middleweight champion defended his performance once again and explained why he believes MMA fans often misunderstand his actions. He also chose to respond to Sonnen's recent trash talk in true "Spider" fashion.

Finally, Silva and I engaged an impromptu ballroom dancing session, much to the delight of the fans in attendance.