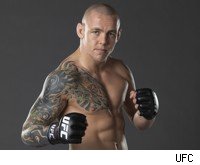 UFC Fight Night 22 takes place Sept. 15 and will likely serve as a lead-in to the season premiere of The Ultimate Fighter 12 featuring Georges St-Pierre and Josh Koscheck. Meanwhile, UFC 118 happens Aug. 28 at the TD Garden in Boston, Mass. and will be headlined by Frankie Edgar vs. BJ Penn and Randy Couture vs. James Toney.

Pearson, the lightweight winner on The Ultimate Fighter 9, will look to extend his Octagon win streak to four against Miller, who is coming off a win in January against Dan Lauzon where he brought home the Submission of the Night honor. Miller was supposed to return in March at UFC Fight Night 21, but had to pull out of a scheduled fight against Andre Winner due to injury.

Baroni returned to the UFC last November and lost a decision to Amir Sadollah. Baroni, 34, actually contemplated retirement Friday, but has since reconsidered. Salter, who will be fighting in the UFC for the third time this year, lost his UFC debut in January to Gerald Harris, but won in May against Jason MacDonald when MacDonald suffered a gruesome leg injury.