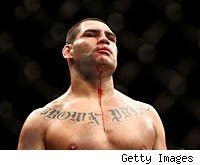 It's one thing to make fight predictions from a safe distance, muttering something to your friends about who's going to win the next main event and then hoping that they don't remember to rub it in your face when your pick gets starched in the first round.

But what would happen if you put your predictions in black and white, and went head-to-head with one of the guys who actually knows what it's like inside the cage? Who knows the sport better: a pro fighter, or a pro writer?

To find out, I tracked down Cain Velasquez at THQ's "UFC Undisputed 2010" party at the Mandalay Bay on Friday night. He was strolling around with a free copy of the game (which he still has yet to play) in his hand, watching as eager fans pitted him against Shane Carwin and Brock Lesnar on TVs stationed around the pool.

"We'll each pick the fights from the main card of UFC 114," I told him. "And then we'll see who's smarter when it comes to MMA. Naturally, I assume it will be me."

In my head, this sounded like an innocent little joke. Cain just looked at me. Right about then it felt like both of us were wondering what the hell my problem was.

But despite my best efforts to make him uncomfortable, Velasquez graciously agreed to face-off over UFC 114, though he insisted that I let everyone know how generally terrible he is at making pre-fight predictions.

"Whoever I pick, you pretty much know the other guy's going to win," he said.

Let's hope nobody tells that to the fighters Velasquez likes on tonight's card. On with the picks.

Michael Bisping vs. Dan Miller
Cain's pick: Bisping via decision. An edge in the striking department will make the difference, according to Velasquez.
My pick: Miller via decision. I don't think Bisping has the ability to finish Miller or the ability to stay off his back against a superior grappler.

Todd Duffee vs. Mike Russow
Cain's pick: Duffee via TKO. Though they may very well end up facing each other one day, Velasquez says Duffee's "power will just be too much."
My pick: Duffee via TKO. I realize this isn't much fun if we pick the same guys, but I can't convince myself to pick Russow for the upset.

Diego Sanchez vs. John Hathaway
Cain's pick: Sanchez via TKO. Velasquez is picking "The Nightmare" based mostly on "intensity," he says.
My pick: Sanchez via decision. He's intense, yes (YES!!), but Hathaway is a tough guy who can make a real fight of it.

And so, in five fights we differ only on one winner and one method. Either we're both really smart, or we're both wrong in very similar ways. We'll know soon enough.