Josh Bryant: Liddell Predicted Ortiz Would Pull Out of Fight 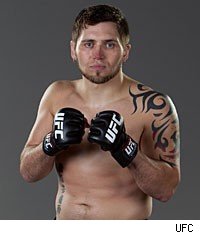 The ninth episode of The Ultimate Fighter: Team Liddell vs. Team Ortiz formally revealed what we've known was coming for months: Tito Ortiz has dropped out of the scheduled fight with his rival coach, Chuck Liddell. And one member of Team Liddell says that Liddell had been telling his team from day one that he thought Ortiz would back out of the fight.

Josh Bryant, one of the members of Team Liddell, says in an interview with MMAFighting.com that Liddell had been saying since the start of taping that he expected Ortiz to refuse to fight him, and that the only thing Liddell didn't know was when Ortiz would back out and what reason he'd give.

Bryant also talked about the two fights on this week's episode and gave his prediction for Saturday night's UFC 114 main event. The full interview is below.

Michael David Smith: In the first fight of the episode, Kris McCray beat Kyle Noke by unanimous decision after three rounds. Did you agree with the judges' decision?
Josh Bryant: Yes, Kris got the takedowns, was able to control most of the action even though Noke was trying to throw a couple of submissions, and overall Kris controlled him and deserved to win the fight.

Did you feel bad that your teammate lost, or good that a guy you had beaten advanced? You already beat McCray so him continuing to win shows what an accomplishment it was for you to beat him.
It was a little bit of both. Obviously I want my teammate to win, but also, if you beat a guy and then he gets some wins, you feel like you've got a better feeling about your own win. I definitely thought from the beginning that Kyle was a good fighter, I knew he trained with Greg Jackson and had fought some good guys, so for McCray to beat him was an accomplishment, and for me to beat McCray had me feeling good.

In the other fight, Brad Tavares beat Seth Baczynski by disqualification because of an illegal kick to the head on the ground. What did you make of that?
That was a crazy fight. Seth came out and took control, had the body triangle, then Brad was able to reverse it. Seth was just fighting on instinct and threw a kick when Brad was down. I didn't think it was dirty, but it's unfortunate that the kick landed the way it did.

I thought Herb Dean made the right decision to disqualify Seth, but a lot of guys on Team Ortiz disagreed. What did you think?
He absolutely made the right decision. Brad got kicked, fell down, walked to his corner and fell down again and didn't know where he was. He couldn't continue, and that's the rule. It's very unfortunate for Seth because he wasn't trying to fight dirty, but but Herb Dean did his job: He protected the fighter.

At the very end of the episode, Dana told Chuck that Tito pulled out of the fight. Were you around at the time?
Yeah, I was in the locker room and Chuck walked in and was very upset. He had called it at the very start of the show that Tito wouldn't fight him, so it wasn't a big surprise that Tito pulled out. We definitely had it in the back of our minds because of what Chuck said and when it happened, we were like, "Wow, Chuck knew."

One other Ultimate Fighter note: Who are you picking in Saturday night's fight between the two coaches from last season?
I think it'll be a good fight. Rampage Jackson and Rashad Evans are both great fighters. Somebody's going to get knocked out, and it depends on who's going to implement their game plan best. I'll say Rampage wins by a knockout in the second round.