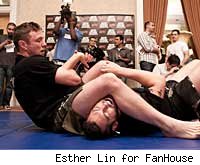 LAS VEGAS -- Dan Miller competes in the UFC. He's a black belt in jiu jitsu, is good enough to have a sterling 11-3 record and has taken two No. 1 middleweight contenders the distance. Yet he'll tell you that he's not half the fighter that Daniel Miller, Jr. is.

The son, who is just four-and-a-half months old, has spent too much of his young life fighting, in and out of hospitals and on his way to a transplant to address genetic kidney disease.

Yet somehow, the father must find a way to clear his mind and prepare for his own fight, one in which his job may be on the line after dropping two straight.

"It's tough but this is my job and what I have to do to provide for my family," said Miller, who will face Michael Bisping at UFC 114. "He's a motivating factor to get in there and get a win. If I lose, my UFC career is probably done so I need to stay focused. I need to get this win."


Soft-spoken and mild-mannered, Miller shares only small snippets of the challenges that have beset his family.

He tells you that for a time, Daniel, Jr. was in a hospital two hours away in Philadelphia, and that he would wear out a path back and forth to see him while in the midst of training.

He tells you that his 10-pound son has to gain at least 10 more pounds before he can qualify for the transplant that will hopefully stabilize his health and ultimately save his life.

He tells you with watery eyes that his son is coming home as he sits there speaking with you, 2000 miles away, and that he can't wait to return to New Jersey to be with Daniel and his wife Kristen.

And you wonder, How this man can even think about fighting, let alone concentrate on the match of his life?

You hear all this and hope that everyone else hears of it, too, that the 15,000 people expected in the sold-out crowd at the MGM Grand send Miller their best wishes in the form of embracing applause.

This is a guy, after all, who came up the ranks in blue-collar style, modest and respectful and hard-working, winning fights on the regional circuit before moving on to the big leagues. Even now, just days before his close-up, Miller is quick to deflect whatever attention comes his way, and shrugs off the relative inattention paid to him as a co-main eventer.

Asked about being virtually ignored during the UFC 114 press conference and he responds this way: "It's a well-deserved spotlight for Rampage [Jackson] and Rashad [Evans]. It's a big fight. They're the draw. People are coming to watch that fight and get the treat of watching other good fights, Bisping and myself included. But they are the ones selling the tickets."

Asked about the golden opportunity in front of him, and he credits his opponent: "I really have to thank Michael Bisping for that. If I wasn't fighting him, I wouldn't have this opportunity. He's a big name fighter and he's been here before. I do think it's a great opportunity and I'm thankful for it."

Miller is so nice that even Bisping -- usually hair-trigger in firing off a sharp-tongued comment on any perceived slight -- could not find anything to criticize about him.

"Normally it's always my opponent who starts trash talk, and then I retaliate," Bisping said. "But there's been nothing from Dan. He's been very respectful in his interviews. He's a good guy and a good opponent, so there's no reason to talk s--- just for the sake of it."

The more you speak to him, and the more you speak to others about him, you become overwhelmed by the feeling that Miller is a guy who is owed some luck, and maybe if it isn't in the cage on Saturday, then maybe it is for something -- or someone -- more important. Maybe it's for both.