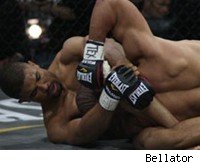 Baker and Schambari previously fought in the WEC in 2007, with Baker winning by split decision. But while that was a close fight that went the distance, this one was never close. Baker sunk in a triangle choke early in the first round and forced Schambari to tap out just 2:29 into the first round.

"I knew he was going to tcome out and try to take me down," Baker said. "But on the ground I knew I've evolved my game where I can finish submissions since the first time we fought. This time I finished it."

Baker will now face Alexander Shlemenko, who won a third-round TKO over Jared Hess on Thursday night, in the Bellator middleweight tournament final. Just as he was before the tournament began, Baker still has to be considered the favorite.