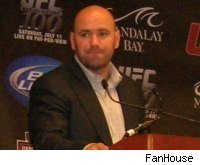 LAS VEGAS -- Just a few years ago, Dana White was just another executive of another struggling company. The UFC's swift turnaround and explosion into the worlds of mainstream sports and pop culture has given rise to the sport of MMA and a celebrity in White.

Last week in Seattle, the UFC president became one of a handful of high-powered execs invited to Microsoft's CEO Summit, and was given the opportunity to address the attending titans of business, which included such luminaries as Microsoft chairman Bill Gates, billionaire investor Warren Buffet, media mogul Barry Diller and U.S. Treasury Secretary Timothy Geithner.

"It was very, very surreal how much respect the UFC got up there when I was there," White said. "It was mind-boggling. I'm in the room speaking to 200 of the guys who make what's going to happen tomorrow and all these incredibly smart guys. When I laid out what the plan is for the UFC and how it works, these guys got it. They got it. A lot of them didn't know what the hell the UFC or MMA was. They knew when I left."

Though the entire guest list of the exclusive event is kept private, videotaped comments made by Microsoft CEO Steve Ballmer allude to White's apparently electric delivery.

"I have to admit, that last session just fired me up," Ballmer said. "The genius of it. I had to love the inspiration, the excitement. The whole day's been pretty good but I have to admit I did get a little fired up. Even some of the words which you're not really allowed to use when you've been in business a little longer were really gratifying for me to hear, and I'm glad to have the opportunity to follow up on that. The juxtaposition of Dana talking about his business, and having had a chance to talk about vision and the need for inspiration and vision and product leads me to the things that I want to talk about today."

White, who directly preceded Ballmer on the stage, said he also got positive feedback from the attendees in person.

"The CEO of Microsoft told me, 'That was awesome,'" he said, before adding that some of the executives from the summit will be attending UFC 114 this weekend.

For a sport that was widely shunned as recently as five years ago, it's been a swift turnaround. The exposure afforded White at the event should not be understated. Attracting new blue-chip sponsors and gaining wider acceptance from major business leaders would be yet another positive step as the UFC continues its wild story of success.