'Rampage' Jackson, Rashad Evans and Politics of Race in MMA 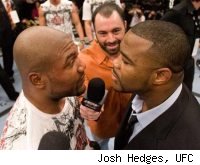 It's almost difficult to believe after so many UFC events featuring so many different permutations of guys making mean faces on the fight posters, but UFC 114 marks the first time a modern UFC pay-per-view card is headlined by two African-American fighters.

Whether that means anything to you personally or not, it's significant, and a little surprising. For a sport with so much international appeal, and one that pits Japanese, Brazilian, British, Canadian, French, and American fighters against each other, often all on the same card, MMA has still struggled somewhat with the African-American demographic.

That's all the more reason why the "Rampage" Jackson-Rashad Evans fight is a delicate matter for the UFC and its fans. The clip of Jackson promising "black-on-black crime" after Evans confronted him following UFC 96, for instance, is a prime example of how the pre-fight hype can send the wrong message in this case.

On one hand, it's an indelible moment that provides valuable marketing material for the UFC. On the other, it probably appeals primarily to a certain segment of the white UFC audience that the rest of us should be embarrassed by.

If you don't believe me, just ask Evans. On last week's UFC 114 media call he called Jackson out for perpetuating negative stereotypes with his public persona. Jackson's response? He accused Evans of being gay.

Not exactly the highest level of discourse at work.

But it's not just Evans, who has every reason to be ungenerous to Jackson after all the animosity that's brewed between them. In a recent conversation with "King" Mo Lawal he repeatedly singled Jackson out for playing to the prejudices of white MMA fans, saying, "All that 'black-on-black crime' stuff, acting like a dog, who do you think that's for? It's not for [African-American fans], and you know it."

At the same time, even if you take for granted that Jackson is playing a character to some extent when the camera comes on, since when is a fighter responsible for representing his entire race while hyping a fight?

No one criticizes Brock Lesnar for playing to negative stereotypes of white Midwestern farm boys with his ornery attitude, or B.J. Penn for evoking an image of a blood-licking Polynesian savage with his post-fight celebrations.

There's an inherent unfairness to designating someone as the appointed representative for an entire group of people, especially if he never asked to carry that burden. If every other fighter speaks only for himself, why should Jackson be any different?

Then again, some things are different just because they're different. It doesn't have to be fair to be the reality of the situation.

Lawal and Evans aren't the first African-American fighters to point to a predominately white fan base as the reason why they hear boos whenever their names are announced. Lawal vehemently insists that the hate mail he receives is primarily racially motivated, and on a recent radio appearance Evans chalked up his struggle with MMA fans to a "color tax" that all African-American fighters have to pay.

I'd like to believe that they're both wrong about that. I'd like to think that fans have the purest of personal reasons for disliking them, and that race never plays a factor.

I'm not completely convinced that it's true, though, no matter how much many of us would like it to be.