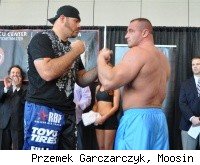 Pudzianowski took to the scale first and weighed in at 273 pounds, 10 pounds less than his KSW fight held in Poland just two weeks ago. He has reportedly spent much of the time since working on his conditioning.

The 6-foot-8 Sylvia checked in at 305 pounds, 18 pounds heavier than he weighed in his last fight held eight months ago.

The Sylvia-Pudzianowski fight will be contested in the super-heavyweight division.

The card emanates from the DCU Center in Worcester, Mass. at 9 pm on Friday.