At 305 Pounds, Tim Sylvia Is Showing Us Who He Is 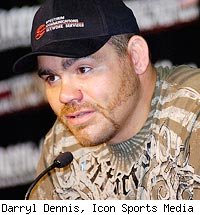 You can tell a lot about an athlete by how he responds to a tough loss. You can certainly tell a lot about Tim Sylvia by the way he has responded to his tough loss to Fedor Emelianenko two years ago. And if you're a fan of Sylvia's (which I once was), he's telling you something about himself that you'd probably rather not know.

We'll find out a little more about Sylvia when he fights former World's Strongest Man Mariusz Pudzianowski on Friday night, but for now I'm more interested in what we found out Thursday when Sylvia stepped on the scale for the weigh-in at 305 pounds.

Basically, what we found out is that Tim Sylvia is a man who doesn't care enough to get into shape, a man not willing to put in the work to be the best, a man who would rather fight inexperienced opponents in freak shows than push himself to the point where he'd be fighting at a championship level again.

Sylvia actually wrote on Twitter that he's lost about 25 pounds, which he may think is an accomplishment but is in reality an indictment: So he once weighed 330?

If Sylvia cared he'd still be a muscular 260-pounder. Instead he's a flabby 305-pounder.

Maybe you think I'm being too hard on Sylvia here, and that judging a fighter by how he looks or how much he weighs is the wrong approach.Maybe you think the fact that Sylvia beat Jason Riley by first-round TKO in his most recent fight is evidence that Sylvia is on the comeback trail.

But if you're wondering how big an accomplishment it is to TKO Jason Riley, consider that in Riley's most recent fight, against a 13-7-1 fighter named Devin Cole, he got TKO'd in 14 seconds. And I don't even want to get into Sylvia's nine-second knockout loss to Ray Mercer last year.

I'll be watching Sylvia vs. Pudzianowski on Friday night, and I'll be hoping to see some signs that Sylvia, at age 34, wants to be a great fighter again. But I'm not very optimistic. I think Sylvia has shown us with his physique that he's done trying to be great.