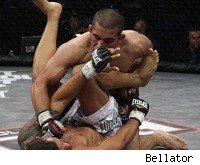 Bellator featherweight champion Joe Soto remained undefeated on Thursday night, beating Diego Saraiva by opening up an ugly cut with a powerful elbow and forcing the ringside doctor to stop the fight at Bellator 19.

The fight got off to a fairly slow pace, with Saraiva spending most of the first round on his back and Soto playing it cautious from the top. But with 35 seconds to go in the first round, Soto brought down his right elbow on Saraiva's forehead and opened up a nasty cut.

For the final 30 seconds of the round, Saraiva's blood poured onto the canvas, and when the doctor got a look at the cut after the round, that was that: The fight was over, and Soto had been declared the winner by TKO-doctor's stoppage.

The 23-year-old Soto is now 9-0 in his pro MMA career, and the win over Saraiva (who had never lost at 145 pounds before) may have been the biggest of his career. He'll have an even bigger fight next when he takes on the winner of Bellator's Season 2 featherweight tournament, either Joe Warren or Patricio "Pitbull" Freire. Bellator has some great featherweight fights in its future, and a great featherweight champion in Soto.