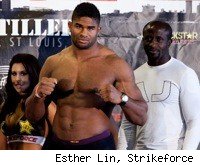 On this week's live edition of The MMA Hour we were joined by Strikeforce heavyweight champion Alistair Overeem in studio to discuss Saturday's successful title defense and his future with the organization.

Finally, Casey's good friend and star of MTV's hit reality show The Hills, Spencer Pratt, stopped by to talk about the fight, his BJJ training and his love of MMA.

Watch or listen to the show below.