Paul Daley: 'There Is No Excuse for My Actions' at UFC 113 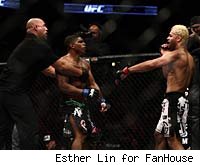 Paul Daley apologized on Sunday for hitting Josh Koscheck with a sucker punch after their UFC 113 fight, a gesture that may be the first step in repairing his tarnished image, but that likely won't be enough to get him back into the UFC which fired him immediately after the incident.

"I've had a long flight home to consider my actions and regret the mistake I made on Saturday. I would like to apologise to the UFC and the Athletic Commission for what I've done as well as all the fans and sponsors that support me," the English Daley said in a prepared statement he gave the Telegraph. "I would also like to offer my sincerest apologies to Josh Koscheck who did not deserve the cheap shot I threw. He did what he needed to do in order to win the fight and get the job done, and I foolishly reacted to the situation."

Daley attempted to explain -- but not excuse -- the sucker punch by saying that he was frustrated by Koscheck bad-mouthing him and by Koscheck pretending to be hurt by an illegal blow from Daley that television replays showed didn't land.

"There is no excuse for my actions and I know what I did was very unprofessional. I was immensely frustrated by a collection of things that took place throughout the fight as well as leading up to it, but I'm certainly not trying to condone or excuse my actions," Daley said. "Josh implemented his game plan perfectly taking me down and staying on top of me for the majority of the fight. I was also frustrated about him claiming (and acting like) I knee'd him in the head on the ground when it was clear for all to see in the video replay that I didn't connect at all with the knee I threw.

"Then finally, the verbal abuse Josh hit me with in the final 30 seconds of the fight simply pushed me over the edge and my frustrations came out as I knew I'd lost the fight, was unhappy with my own performance and had then been ridiculed by my opponent to top things off."

Still, Daley added, "This is certainly no excuse for my actions; I fully deserve to be punished for what I did and hope that everyone I have disappointed can forgive my rash decision."

Saturday night's fight ended with Koscheck on top of Daley, and when the final horn sounded Koscheck got up and pumped his fist in celebration. About five seconds later, Daley walked over to him as if to shake hands, but instead punched him in the eye with a left hook. Koscheck simply shrugged off the punch and continued to celebrate while the referee, Dan Miragliotta, put Daley in a bear hug.