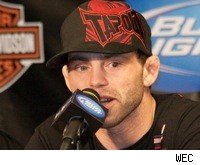 "I'm 34 years old and lost five fights in a row," Pulver said on HDNet's Inside MMA.

But Pulver, who's still probably the second-most popular fighter in World Extreme Cagefighting even though he has only one victory in the promotion (his WEC debut in 2007), says he's not yet ready to say he's finished in MMA.

"I'll never retire," Pulver said. "I just want to ride off into the sunset and be left alone. I'm never going to make one of those big speeches. ... I'm not going to retire and say I'm done because you're never done ... I'm never going to be done with this sport so for me there's no reason to say I'm retired."

Pulver knows that some people say he should retire for his own safety, but he says he hasn't been knocked unconscious and therefore doesn't believe it would be dangerous for him to step back into the cage.

"I guess No. 1, I look at it as how have I lost them? No doctors waking me up, no smelling salt, it ain't five minutes later and I'm on a gurney. I'm getting caught in submissions. I'm in wars with guys like Urijah Faber," Pulver said. "I would like to continue. Physically, I feel great."

Still, Pulver sounded like a man who knows the end of his career is near, even if he's not ready to say it's here.

"You never really think about the end, when it's going to be and how it's going to happen," Pulver said. "It's been an incredible run and it's been a fun ride."