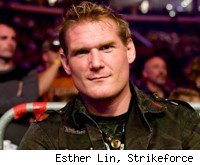 Ever since his heavyweight showdown with Fedor Emelianenko at Affliction: Trilogy fell apart due to a positive steroid test in California, Josh Barnett has been a heavyweight without a home. He's stayed busy with pro wrestling dates in Japan, mixing in an MMA victory over "Mighty Mo" Siligia in Dream, and he recently accepted a fight against virtual unknown Geronimo Dos Santos scheduled for July in Australia.

MMA Fighting spoke exclusively with Barnett about what his future plans are in MMA, when he might finally get his shot at Fedor and much more.

BF: So tell me what you know about Geronimo Dos Santos.

JB: Well, he looks kind of like the Brazilian Kimbo [Slice].

Is that pretty much the extent of your knowledge about him?

I've seen him fight. He's a big guy, strong dude. I'm sure he's training on a regular basis, working on all aspects of fighting, all that. He looks like a slugger to me, though. Big powerful guy, but not overly agile or athletic. I'm sure he didn't he didn't amass a record like he did by being a total chump, but we'll see what happens once he gets in the ring with me and he starts getting tagged.

Was there something about this fight that seemed particularly attractive to you, or did you just want to fight someone?

I just wanted to fight in general. He was a name that was brought up that was willing to get in there with me, so, okay, fine by me. I'll take his head and add it to the pile.

What's your situation with the California State Athletic Commission. You were never suspended, correct?

I was never suspended. I can reapply for a license in June.

I know you were working on an appeal, at this point do you give that up and just wait until June to reapply?

Well, we went through a lot of steps to try and work through the process. We asked for information, all the information, actually, from the lab and from the CSAC, and it took months before we were actually given all the information we requested. That's held up our ability to set up our appeal. One time when we had set it up, my counsel was snowed in, so that put a cramp on things. Then the last time, we showed up with all our information and I couldn't make the appeal hearing in person, and at the last minute they said they wouldn't allow it to happen.

They said a letter was sent to me telling me about this, but I never received a letter. Plus, they called me to tell me about it afterwards, so they could have called to say I needed to be there. Or they could have sent me an email. They have all my information. They also have my counsel's information, so there's no problem reaching anybody. At a certain point it just all whittled down to where it doesn't even seem worth it to go through the process. But, if at a certain point I need to deal with them to get licensed in California again, I know I can present plenty of evidence as to why I should be licensed.

Do you think all this difficulty was deliberate by the CSAC, or is it just genuine misunderstandings?

You know, I'm not going to comment on that.

Fair enough. Since you have about a month to go until you can be licensed again, are you actively pursuing a deal with the UFC or Strikeforce?

I don't pursue them, they can pursue me. I can fight anywhere else, it's not a problem. Any time the UFC or Strikeforce or anybody else wants to make it happen, then do so. Don't bulls***. I don't have any patience for that. I accept any serious offer, and I'm able to fight anywhere else in the U.S. I was just denied a license in California.

Do you want to fight in the UFC or Strikeforce?

I'm happy to fight wherever things work out for me. The thing is, if anybody wants to be totally legit they have to fight the very best guys and I don't care what your rankings say, I'm the best guy right next to Fedor. When you look at a guy like Cain Velasquez, he's a tough kid who's fought his way up the ranks, but he doesn't even have as many fights as I have wins. He's still growing into his own.

Can he be the best guy in the world right now, or top five? Maybe, but I don't know. It's not that easy. There's a lot of people who have really put the time in and just because someone starts doing well right away, that doesn't make him awesome. Guys get a couple of wins and people start changing their rankings way too soon.

Do you feel like you need to fight Fedor at some point for your career to be complete?

I kind of feel like I probably do need to fight him. He's the best guy out there, and I want to be the best. And I feel like since we're pretty good friends that might be the No. 1 reason that it would be a really good fight. But I don't have a lot of control over that. I think it will happen. A lot of people still approach me about it.

It will probably be some time next year. I think it will probably take that long for something to be put together that both parties would be satisfied with. I'm willing to if he's willing to. For us it's just a competition. If someone's going to beat him, I'd rather it be me, and vice versa. Although, I really don't want to lose to anyone.

Why do you say it will be next year?

The thing is, even setting it up the first time, it took a long time for everyone to be happy with what was going on. If they're going to throw a contract in front of you, I don't care who it is, it's going to be littered with attempts to get a hold of every piece they can make money off of. I'm just not that guy who's going to sign whatever. Plus, any company that can put the fight together, they're going to have be established enough or have deep enough pockets. I don't know if that's really out there right now.

When you talk about the 'they' in that sense, are you talking about the promotion or M-1 Global?

It will be both. M-1 is going to want to make sure they're happy with the terms, and so is the promotion and so am I. The promotion always wants to get as many rights as they can and hold them as long as they can so they can use them as much as possible. And there may be rematch clauses on M-1's part, you know, a ton of things that can pop up. That's not anybody being difficult, it's just the nature of the business. When we were putting the fight together the first time, the date kept getting pushed all over hell and that made me really skeptical about the whole thing until maybe a month before.

After what happen to that last fight after you were denied a license and Affliction cancelled its show and then folded MMA operations, do you think that might make promotions like Strikeforce or the UFC hesitant to pick you up?

Maybe. But I'll just deal with it. However, is it my fault Affliction folded? Absolutely not. They had plenty of people who could counsel them in the proper way to run an MMA promotion, but they didn't want to listen. It cost them. It really did. Even if that event had happened, they were never going to do another event.

They spent way more than they could afford to, and the company was moving on because it was starting to hurt their garment industry. That's how they make their money and that was being hurt because of the lack of success with the MMA promotion. It's not as if they were truly unsuccessful, but they just spent more than they could. There were a lot of great things about it, but you have to know who to pay what and how to pay them and all that, and it just didn't happen.

I know you make a lot of money pro wrestling in Japan, but you obviously still want to compete. I mean, you're fighting guys no one's heard of, you're showing up at regional grappling tournaments. Do you feel like you need to be competing against top 10 guys right now in MMA in order to fulfill that competitive desire?

No. I mean, I'd like to, but that's not up to me. The minute I start running around and trying to make fights happen with other people, that puts the ball in their court. I'm not here to try and put someone on a pedestal and give them the ability to get the most out of this. I speak for myself, my record speaks for itself, and my ability speaks for itself. At some point, these guys are going to have to fight me.

According to K-1, when they were booking me for the last Dream fight, a whole list of people, top 10 and otherwise, refused to fight me. So what am I supposed to do in that situation? I'm not going to not fight. I'm here to beat the crap out of people. That's why I exist. So it may be tomorrow or it may be next year, but I'll get my hands on these guys some time.

So where does that leave you right now?

We'll see. Often in fighting, you get dealt certain cards and that's what you have to work with. If the top 10 guys want to fight me, they can. Honestly, I'm sure plenty of them are happy fighting in their little circles that they have right now, not having to deal with a guy like me. I'm not an attractive fight for most people. I never have been. I haven't been called out too many times in my career, and there's a good reason for that.