DREAM EP Keiichi Sasahara on Shinya Aoki, the Cage and Future of DREAM 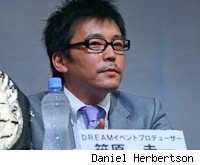 There has been a lot of negativity towards Japanese MMA in the Western media lately especially after Japanese stars Shinya Aoki, Takanori Gomi and Caol Uno were all defeated in high-profile bouts recently.

This lack of success and negativity concerns one man more than any other. DREAM Executive Producer Keiichi Sasahara talked to MMAFighting.com about the lack of success for Japanese fighters in America, the ring versus the cage and the future of DREAM and Japanese MMA.

Daniel Herbertson: What did you think of Aoki's performance in Strikeforce and were you surprised by it?

Keiichi Sasahara: What did you think of it?

I thought that he didn't adapt well to the cage. He couldn't get a takedown and nearly every time he had [Gilbert] Melendez in his guard, Aoki's back was either against the cage or Melendez's head was on the fence so a submission wasn't possible. Then, he wasn't able to change his game plan or work around this problem. He was also outstruck, of course.

I was annoyed when I heard about that fight. I am not a technical person though regarding MMA so it is not something that I can really speak about. But after the fight, [Satoru] Kitaoka was saying about the timing and the distance and that Aoki wasn't able to get the timing right. That was probably the biggest reason he was defeated.

There is not much difference.

Well what do you think that Japanese fighters need to do to be more successful in the West?

Well it is like comparing soccer to futsal. They use the same ball, and they are similar sports, but the content is really different. A fight in a cage and a fight in a ring are really different. Japanese fighters need to train for the cage as it is a completely different experience. But the truth is, a really strong fighter doesn't need to make any adjustments. Look at Fedor.

How about weight-cutting, differences in training and travel. They didn't play a factor in this lack of success? It was clear that Uno especially was a lot smaller than Gleison Tibau.

You don't see the same heart and passion in Japanese fighters as you do as in foreign fighters?

Yes, but it is not about the country they are from but it depends on the individual.

Are there any individuals that you think would be successful abroad then?

This is a tough question so soon after Aoki was defeated. But [Tatsuya] Kawajiri or [Katsunori] Kikuno might have a good chance if they were to go abroad. At featherweight, I think [Takafumi] Otsuka and Hideo Tokoro can be great.

Prior to the fight, Aoki said that if he loses Japan will become an MMA colony to America. What do you think about that?

After the fight, when the press asked Aoki if Japan is now an MMA colony of America, he said "The results speak for themselves."

He wasn't thinking at all. We are not a colony of American MMA. This colony thing that Aoki said and the results of that match led me to want to have DREAM 14 in the cage. I want to prove something to the MMA world.

Why? What does having DREAM 14 in the cage prove?

There will be something that I can prove to the MMA world. When we think about the cage that we used at Dream 12, the "White Cage" – it sounds similar to the one that is used in North America, but it is really original. It has a Japanese aspect to it. If we are to keep on going having cage fights in Japan, we need to create a really Japanese style cage fight.

However, I really just thought that the idea was great. I had a meeting with all of the people from FEG because all the tickets had been sold and the venue was set for a ring. But we had enough time to change so I thought, why not and that this would be a great opportunity to answer the question for Japanese MMA – which direction should we go? Cage or Ring?

What do you think is better? The cage or ring?

Personally, I like to watch MMA in a ring but there are a lot problems with the ropes. It does make more sense to fight in the cage because of that. Taking photos in a ring is a lot easier though.

So, is this an indication that you will be moving to the cage permanently?

I am still thinking about it. All the people around the world are saying that the world standard is the cage but the ring is our tradition. Probably, we will start to alternate between ring events and cage events. At the moment, I want to talk to all the fighters, officials, sponsors and fans about what they would like.

How do you think the fighters would feel about having to switch between the ring and cage every event?

(Laughs) They would probably say "No way!" They would want me to decide.

It is hard to think long term, I am always thinking about things happening tomorrow. In my personal opinion, I have a special attachment to the ring as I was worked with PRIDE for a long time. But my opinion is not going to satisfy all those other people who are working with me. I want to create something that everyone can be happy about. We are in a difficult position right now and we need to decide our future.

Do you ever talk to (former PRIDE CEO) Nobuyuki Sakakibara or ask him for advice?

Not at all. No, I haven't talked to him at all. He is managing a soccer team now.

You noted in a Q&A session with fans this week that you had a lot of questions about PRIDE rules. Will they be coming back into DREAM?

We haven't decided yet. When we finally decide on whether to settle on the ring or cage, the rules must then be adjusted. Whether we will use elbows, knees or soccer kicks will depend on if we are using the cage or the ring. I would like to hear the opinion of others too. The fighters, broadcasters, sponsors and of course the fans.

What is happening with DREAM's sponsors right now? Heiwa and Olympia are no longer sponsoring DREAM?

To be honest with you, we are in a really difficult situation. There are some sponsors that are interested but it is difficult as the whole country is in recession. Look at Toyota, even they are having a difficult time.

Don Quijote own or sponsor Sengoku Raiden Championship, Pancrase and Shooto now. Are they interested in sponsoring or purchasing DREAM?

Don Quijote sponsored Dynamite!! because we got together with SRC but they are not a sponsor of DREAM. Don Quijote is a company that Japanese MMA must hang on to but for us to enter a relationship with them is a completely different thing than those other companies. Of course, we have our relationships with the TV networks to consider too. Even though we have a good relationship with them, we are completely different story than those other promotions.

Speaking of TV networks, how is the relationship between DREAM and TBS? How much say does TBS have in the running of DREAM?

I think you will see DREAM on TBS in 2011 too. We have a yearly contract with them so if we keep holding great events and getting good ratings, we will get an extension next year. People are watching DREAM nationwide on TBS. They just give their opinion to us on what the nation wants to see and nothing more.

Will FEG and Dream continue working together in the future? There have been rumors of a possible split.

(Laughs) We are fine. We are really, really OK.

Because of these recent high profile losses and the trouble with sponsors, there is a lot of negativity towards Japanese MMA right now. What are some things that we can look forward to?

To fight abroad is up to the fighter. If they want to go abroad then I will be happy to send them off. Their record is just a number. It is just a sheet of paper.

I am promoter and essentially this is a marketing company. At the moment the UFC is successful with marketing but I am not looking at them with envy. I am working on ways to compete with them right now. I am working to make things better. One day, in maybe two or so years, I will be happy if you, or the people reading your article can say "Oh, Sasahara meant this two years ago."

Specifically, what are you working on?

I cannot speak about the details yet.

As you said there has been so much negativity about Japanese MMA, and actually I think a lot of it is true. I am also working on something for the summer and autumn that will bring back some new life into to Japanese MMA.

So we will see some changes this year?

Yes. Dream 15 will be in the summer and then in autumn we will have Dream 16. It might be in Korea or in Japan, we still don't know.

We should look to those two events to bring something positive back to Japanese MMA? What can we expect?