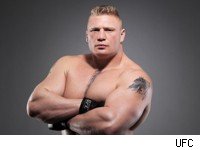 Brock Lesnar will face Shane Carwin to determine the undisputed UFC heavyweight champion at UFC 116 on July 3 at the MGM Grand Garden Arena in Las Vegas, the UFC announced Tuesday.

Lesnar returns from a bout with diverticulitis to defend his belt against the undefeated Carwin, who won the interim belt from Frank Mir at UFC 111.