Kurt Pellegrino Says He'll Never Tap, Will Retire if He Loses Another Fight 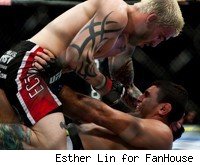 Kurt Pellegrino may be riding an impressive four-fight win streak in the UFC, but he still seems to think he could be just one loss away from retirement.

That's what he claims anyway, saying in the past that his next loss would prompt him to quit the sport for good. When asked by Ariel Helwani on this week's episode of The MMA Hour whether he was willing to stick to that claim, the lightweight contender affirmed that it wasn't just idle talk.

"I told my wife and daughter, if there's someone out there who can beat me, I have to start all over again. I'm at the bottom...and I don't know if I can do that."

Pellegrino also said that his most recent loss – a triangle choke submission to Nate Diaz in 2008 – was the last time fans will ever see him tap out in a fight.

When the conversation turned to Diaz, who had a few choice expletives for Pellegrino in an earlier interview with Helwani, "Batman" seemed far more confused than upset.

"I don't know what Nate's so mad about. He won the fight. I'm sorry that I beat you up in round one, but you won."

In fact, Pellegrino said his current win streak is a direct result of the loss to Diaz. The defeat made him train harder than ever before, he said, while also encouraging him to seek out the help of friend and training partner Kenny Florian.

"I kind of owe my four-fight win streak to him," Pellegrino said of Diaz.

"I'm going in there to finish the fight," said Pellegrino. "I'm coming in on my shield and I'm willing to leave on it."

Pellegrino also admitted that he didn't know if Sotiropoulos would be allowed to wear the same knee sleeves that he wore in his last fight against Joe Stevenson in Sydney, Australia, but concluded, "If he's going to wear them, I want to wear them."