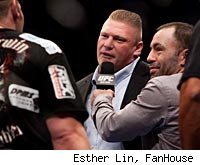 Heading into a rare weekend without any major mixed martial arts cards, we'll stop to take a look at some of the big questions facing the sport in the months ahead.

Ben Fowlkes and I will talk about upcoming UFC and Strikeforce title fights, debate the future of Kimbo Slice and talk about the pay-per-view plans of World Extreme Cagefighting, but we'll start by contrasting Saturday night's big boxing card with the best the UFC has to offer.

1. Will any UFC shows this year top Saturday night's Floyd Mayweather Jr.-Shane Mosley fight in pay-per-view buys?
Michael David Smith: Probably not. Golden Boy Promotions is pushing a claim that Mayweather-Mosley could do as many as 4 million buys, which is just ridiculous, but I do think the fight could do in the 1.5 million range, which would be extremely difficult for the UFC to top.

From a pay-per-view perspective UFC 116 has a lot going for it: It marks the return of Brock Lesnar, the biggest pay-per-view draw in MMA history, against Shane Carwin, a man many fans think has the best chance of anyone in the sport of beating Lesnar. It has an undercard with a lot of fan favorites on it. It's taking place July 3, and Fourth of July weekend is typically a big one for UFC pay-per-views. If any UFC show were going to beat Mayweather-Mosley, that would be the one.

But while Zuffa has far surpassed any boxing promoter in terms of annual pay-per-view revenue, when it comes to the biggest of big events, boxing still tops MMA. Mayweather is a major draw, and against an opponent as well known as Mosley, he's going to beat the best the UFC has to offer.

Ben Fowlkes: If Mayweather-Mosley does 4 million buys I will go down to the Golden Boy offices and give every employee there a passionate kiss on the mouth. That place is staffed entirely by really attractive women, right? But really, we're talking about a fight that is essentially a sad substitute for the one fans really want to see between Mayweather and Manny Pacquaio. You're telling me 4 million people are coughing up the cash for that? Boxing diehards may be desperate right now, but there aren't that many of them and they aren't that desperate.

If this fight does fall into the 1.5 million range, and I think that's a pretty good guess, it's not out of the question for UFC 116 to match it. Lesnar-Carwin is a huge fight, and the UFC can count on getting more of a push from mainstream sports media outlets whenever Lesnar's on the card. If the UFC could add just one more big draw to the lineup, it's not completely unreasonable to imagine the stars aligning and the buyrate soaring. Unlikely? Yeah. But impossible? No.

2. Which upcoming UFC title fight are you most looking forward to: Lyoto Machida-Shogun Rua, Brock Lesnar-Shane Carwin, Anderson Silva-Chael Sonnen or Frank Edgar-B.J. Penn?
MDS: Lesnar-Carwin. I'm a sucker for a big heavyweight fight, and this is one of the biggest heavyweight fights the sport has ever seen. Both Lesnar and Carwin have physically manhandled everyone they've ever fought (even in Lesnar's one loss, he was physically manhandling Frank Mir right up until he got caught in a kneebar), and it will be fascinating to see who's the bigger, stronger man when they face each other.

As for the other fights, I'm also very excited about the Machida-Rua and Edgar-Penn rematches because I thought both of their previous fights were close enough that they could have gone either way. Silva-Sonnen interests me less because I don't think Sonnen has the MMA skills to back up his big talking, and I'd rather see Silva move up in weight class and fight someone who could provide him with a greater challenge.

BF: I briefly considered trying to make an argument for Machida-Rua, maybe throwing out some half-hearted line about the beauty of technique and the psychology of the rematch. But screw it, I want to see the two big bulls go at it just as much as you do. It's the kind of fight where I know I probably won't get to see more than a few minutes of action before it ends in one tremendous thunderclap of pain and destruction, but I honestly don't care. It's still worth every penny.

My second choice, however, that's definitely Machida-Rua. Mostly it's because I have no idea how it will go. Will Machida be more prepared for Rua's kicks? Will Rua try the same approach this time, or will he be trying to finish at all costs and not risk another bad decision? Consider me officially vexed, which is why I can't wait for this fight.

3. What do you make of Kimbo Slice's chances against Matt Mitrione at UFC 113, and what do you see in his fighting future beyond next Saturday night?
BF: Here's a fun fact: this is the first time in Slice's pro career that he'll be the more experienced fighter in the cage. His official 4-1 record isn't anything worth bragging about yet, but it's still got Mitrione's one-fight pro career beat. That said, I have to give the edge to "Meathead" in this bout. He's bigger and stronger, and Slice won't get past him on athleticism alone. Unless Kimbo has made considerable gains in both technique and cardio since his barely credible performance in that catchweight bout against a hand-picked Houston Alexander, Mitrione should win this.

But never fear, Kimbo fans. The bearded one isn't going anywhere just yet. Even if he gets knocked out cold by Mitrione he'll still be 1-1 in the Octagon, and he'll still have drawing power with the mainstream fans. The UFC might have to go out and re-sign some recently released heavyweight in order to find him a winnable fight, but that's very doable. Even if he loses and loses badly in Montreal, the UFC management is savvy enough to hold on to him for at least another year or so.

MDS: I was surprised when the UFC announced Kimbo-Mitrione because I thought the UFC would choose someone a lot easier for Kimbo to beat. Mitrione is inexperienced, but he's not a pushover: He played defensive tackle in the NFL, and anyone who can play defensive tackle in the NFL is bigger and stronger than Kimbo. Kimbo can pick up Alexander and slam him to the ground, but he can't do that to Mitrione.

4. What would the WEC have to do to sell another pay-per-view in 2010?
BF: Assuming that Zuffa is happy with the rumored 150,000-200,000 buys from the first WEC pay-per-view – and there's no reason not to be – this is a question that Dana White has to be asking himself right now. There's no one big name in the WEC that can sell pay-per-views all on his own, no 145-pound Brock Lesnar. That means the card has to be loaded with at least two title fights, and one of them needs major star power.

My ideal lineup would have Jose Aldo moving up to 155 pounds to take on Ben Henderson, while also having Dominick Cruz defend his title against Miguel Torres (who would need a high-profile win between now and then). You throw in an obligatory Urijah Faber fight and a rematch between Leonard Garcia and "The Korean Zombie," and you've got yourself a winning formula.

MDS: First of all, I'm definitely with you that a Garcia-Chan Sung Jung fight absolutely must be on the next WEC pay-per-view. That fight has people talking more than any fight without Faber in WEC history.

I'm less excited about Aldo-Henderson, though. The WEC only has three champions as it is, and I think they should spread their title fights out and keep some of the champions free for the Versus shows, not put two champions in the cage together. And that reminds me: Why hasn't the WEC launched its flyweight class yet? I believe they should do it ASAP, and do it with two bantamweights who would be able to make 125 pounds, Joseph Benavidez and Charlie Valencia.

5. How meaningful is the Brett Rogers-Alistair Overeem Strikeforce heavyweight fight?
BF: Regardless of the very valid criticisms of this fight – how did Rogers earn a title shot by losing to Fedor Emelianenko, exactly? – I have to admit that I'm really looking forward to seeing this. For one, it will be the first time since 2007 that the Strikeforce heavyweight title goes up for grabs. It will also be the first legitimate MMA fight for Overeem in at least a year and a half. Whatever misgivings I may have about this bout's ability to determine a champion of anything that matters, at least it's a step in the right direction.

Ultimately, the real heavyweight fight Strikeforce needs to make is Overeem-Fedor, but even getting those two in the same room seems like a chore. At least on May 15 we'll get to see Overeem put his title on the line, undergo a drug test, and fight a quality opponent. Since those are three things he's spent the recent past avoiding with great success, I'm willing to overlook my other concerns for now.

MDS: I don't much care about the Strikeforce heavyweight belt, but I do care about Overeem -- who has turned into an absolute monster while fighting in Japan over the last couple years -- fighting a high-quality American opponent like Rogers.

Based on what Overeem has done in K-1 over the last two years, and based on the fact that Overeem has 19 career wins by submission while Rogers has only one (and that was a submission due to punches), you'd think Overeem has the advantage both standing up and on the ground. And yet I'm actually leaning toward picking Rogers because I think Overeem has grown so accustomed to simply throwing his opponents around at will that he's going to get a rude awakening against a hard-punching. 265-pounder. This fight should be a lot of fun, even though it's a little silly to call it a heavyweight title fight when we all know Strikeforce's best heavyweight is back in Stary Oskol.