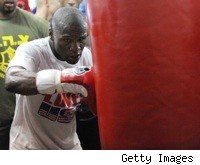 Since you're reading about MMA on the internet right now, there's a chance you don't already know what I'm about to tell you. This Saturday night at the MGM Grand Garden Arena in Las Vegas, Floyd Mayweather takes on Shane Mosley in a fight that's sort of a big deal for boxing aficionados.

Maybe you're one of those rare crossover fans we've heard so much about in recent years, in which case you already know this stuff. Maybe you're also one of those fans who is equal parts rabid and wealthy, so you don't even blink at paying fifty-five dollars (sixty-five if you want to see it in HD, and come on, there's no way you're about to go back to watching regular D at this point in your life) to see one fairly predictable fight.

But say, just for the sake of argument, you're a fight fan on a budget. With last weekend's WEC pay-per-view, this weekend's boxing blockbuster, and next weekend's UFC 113, you have some tough choices to make. If things continue at this pace, by next winter you'll be choosing between the cable bill and the heating bill. Take it from me, a man watching fights while wrapped up in a sleeping bag makes a poor impression.

What you have to ask yourself is, where am I getting the most value for my money?

Mayweather/Mosley has UFC 113 beat in one area, and that's star power. These are two of the biggest names in boxing, and while it's not the Mayweather/Pacquiao showdown that fans have been salivating over, it's at least the next best thing.

Lyoto Machida vs. "Shogun" Rua? It's a good fight and an interesting rematch, but both those guys could probably walk through any mall in America without being mobbed by adoring fans, who would need a translator just to have much of a conversation with either of the Brazilians.

Then there's the question of entertainment value. Here, it's a dead heat between the two main events. Mayweather is a defensive genius, which really means that he wins without ever having to fight more than he wants to. Machida is much the same way. While he's shown a willingness to play the role of the knockout artist at times, there's always a chance of an "elusive" five-round performance that puts fans to sleep.

But here's a question for the boxing enthusiasts: what other fights on the Mayweather/Mosley card are you really excited for? Quick, without looking it up, just name a couple of the guys on the undercard. Go ahead. I'll wait over here.

You see, this is where the UFC has boxing beat, and for ten bucks less. In addition to a title fight, UFC 113 also has what could be a No. 1 contender match in Josh Koscheck-Paul Daley, as well as bangers like Sam Stout and Kimbo Slice filling out the undercard.

This makes for what you might call entertainment insurance. If the main event ends up looking too much like a chess match and not enough like a bloodbath for your particular tastes, a solid undercard guarantees you won't have wasted your money on a series of shoulder rolls and fancy footwork alone.

If boxing has one major problem, this is it. It's become a sport that only cares about the big stars. That's somewhat understandable since, as this weekend's fight will no doubt prove yet again, guys like Mayweather can still cruise to over a million pay-per-view buys without breaking a sweat. But what happens when he hangs the gloves up for good? Or when he runs out of interesting opponents? What happens for the fifty or so weeks a year when he's not fighting?

The UFC may not have a Mayweather on next weekend's Montreal card, but it does have variety. It has found a way to get fans to care about every fighter they see instead of only the guys in the main event. When it comes time to decide where and how to allocate the monthly pay-per-view budget, that makes a big difference.

But what am I telling you for? You're reading about MMA on the internet. Chances are you already know this stuff.